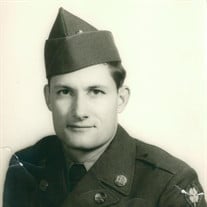 Click Here to View Julian's Graveside Service Julian Sanders Miller, age 93, of Bluff City, Tenn, went to be with the Lord on Monday, January 17, 2022. He was born on April 9, 1928, in Meadowview, Va, to the late Marion Miller and May Paris Miller. In addition to his parents, he was also preceded in death by his wife, Alice Greer Miller; four brothers, J.C., Earl, Lynn and Paul Miller; and three sisters, Margaret Branch, Pearl Widener, and Rebecca Stapleton. Julian was a veteran of the United States Army having served in the Korean War and was a recipient of two Bronze Stars. Julian retired from Raytheon as a welder and was a member High Point Baptist Church, but attended Woodlawn Baptist Church for most of his life. Julian was an avid fisherman, loved going to the flea market, watching football and spending time with his family. He is survived by daughter: Debbie Miller Caffey and husband Bill of Bluff City, TN; granddaughters: Sarah McIlwain and husband Doug of Savannah, GA; Anna Pierce and husband Jonathan of Jonesborough TN; great granddaughters: Vivian Alice and Imogen Pierce; and several nieces and nephews. A Committal Service will be held at 11:00 am on Saturday, January 22, 2022 in the Heritage Chapel of Glenwood Cemetery in Bristol, Tenn, with Pastor Joe Blankenship officiating. Everyone is asked to meet at the cemetery by 10:50 am. In lieu of flowers, memorial contribution may be made to Woodlawn Baptist Church, 1400 Southside Avenue, Bristol, TN 37620.

Send flowers to the Miller family.