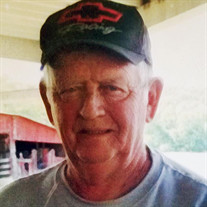 Wyndom “Sonny” Tallman, age 79, of Bristol, VA, went to be with the Lord on Tuesday, August 6, 2019 at NHC Healthcare in Johnson City, TN. He was born on August 21, 1939 in Bristol, VA, a son of the late Willard Beverly and Stella Mae Stewart Tallman. Along with his parents, he is also preceded in death by his sister, Louise Wingate; and brother, Guy Tallman. Sonny was a member of Tennessee Avenue Baptist Church where his father had served as Pastor. He was also a member of the Bristol Quarter Masters Racing Team and Corvette Club. He won a considerable amount of titles for showing cars. Sonny retired from Ball Corporation as a tool and dye maker with numerous perfect attendance recognitions. He enjoyed farming and reading about history. He loved spending time with his grandchildren who were his “little buddies”. He is survived by his daughters, Tammy Moody and husband Eric and Beth Ball; son, Landon “Bo” Chapman and wife Rebecca; sister, Laura Lee Owens; brother, Alvin Tallman and wife Nancy; grandchildren, Tyler Moody, Dakota Moody, Cameron Chapman, Marissa Chapman, Zachary McEwen, and Holly Davis; six great grandchildren; several nieces and nephews; and special neighbor, Frank Dutton. The family will receive friends from 1:00 PM to 2:30 PM on Saturday, August 10, 2019 at Oakley-Cook Funeral Home in Bristol, TN. The committal and interment service will follow at Mountain View Cemetery in Bristol, VA with Rev. Benny Bowman officiating. The family would like to extend special thanks to all the caregivers at NHC Healthcare of Johnson City and all who provided care at home, especially Diana Terry.

The family of Wyndom "Sonny" Tallman created this Life Tributes page to make it easy to share your memories.

Send flowers to the Tallman family.