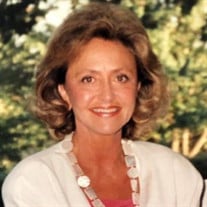 Wilma Boothe Fletcher, born June 3, 1935 in Christiansburg, VA went to heaven on June 7, 2019. After several strokes and her second colon cancer in 2012, Wilma then resided at NHC Healthcare Bristol until her passing. Despite being bedridden most of this time, she maintained beautiful humility, spunk (the NHC CNA’s and nurses can attest to this), humor, and avid book reading. Despite her illness, she rarely if ever complained, preferring to accept life’s blows and make humor out of difficulty. She really displayed admirable courage, and always concentrated more on the needs and concerns of others rather than herself. Although not hesitant to provide gentle correction, her philosophy of life was that of love and forgiveness. She enjoyed telling stories of her fond memories of growing up in Christiansburg, VA, taking art courses at University of Florida, enjoying time with family in Bristol, and selling real estate. In Wilma’s own words, her family and grandchildren were the joy of her life. Wilma was valedictorian of Christiansburg High school in 1952. She met W. David Fletcher at Virginia Tech and they married one weekend after telling their parents they were going squirrel hunting. Wilma’s mastery of English, spelling, shorthand, and typing on a manual typewriter, in addition to her striking beauty and kindness, helped her land jobs easily. Wilma took her real estate profession very seriously, working diligently to find the right house for her clients during her years at The Brown Agency, and Heritage Homes. She enjoyed being part of the 1900 Literary Club, Child Study Club, and the Border Guild / Junior League of Bristol. In the 1970’s Wilma was affectionately known as the “Picture Lady” by Bristol area elementary school kids who she would visit monthly to teach art history. Wilma was an artist, loving charcoal, watercolor, and oil/acrylic media and won ”Best in Show” for her “Flowers” painting in 1975. She enjoyed dancing with her family to an upbeat tune any time of day in the kitchen or living room. She loved cooking, reading, gardening, refinishing antiques, and making a good find at an auction. Wilma greatly enjoyed sewing (except for hemming our blue jeans from Park’s Belk), and she made many of her own beautiful dresses. She loved her boxer dog “Honey” and they rode everywhere together in the car, and sunned together on the deck. As the English and spelling expert, she was chief editor for any family writing assignments from our grade school days until near her passing. She enjoyed her “birthday club” of Dorothy Cooper, Angela Hopkins, Luann Crockett, and the late Mary Ann Little, and enjoyed her close friendship with the late Musser Warren. Always enjoying looking nice, Wilma was particular about getting her hair done by her stylists Mike Moore and Lynn Barker. Losing her first son Mark David Fletcher Sr. in 1996 to pancreatic cancer was immensely traumatic, with the love from friends, church and family helping her endure. Wilma’s worn bible was the King James. She attended State Street United Methodist Church for which she was particularly fond of the Fidelis class taught by the late Dr. Joe Hardwick. Wilma was preceded in death by her parents Harless and Reba Boothe, her son Mark David Fletcher Sr., and her niece Sherri Lynn Reynolds. She is survived by Dr. W. David Fletcher, son Steven L. Fletcher and wife Rebecca, their children Wesley Steven and Anna Kate, son Dr. Terry M. Fletcher, sister Bonnie Huff, daughters Wendy Dunham and husband Stephen, and Jennifer Mattox, grandchildren Mark David Fletcher Jr. and Robert W. Fletcher, their mother Carolyn Kistner Fletcher - Helton and husband Robert Helton; nephew Jon Fauble. The Fletchers would like to express appreciation for the care provided by Hella Davidson - Wilma’s caretaker since 2012. Wilma frequently said that she could have never survived all she had gone through in the past several years without Hella’s loving attentive care. We would like to express great thanks to the wonderful CNA’s, nurses, doctors, social workers, all the administration, cleaning professionals, and cooks, at NHC Healthcare Bristol. We would like to express great appreciation to Dr. James Schrenker, Wilma’s wonderful primary care doctor for many years as well as her hospice physician, and to all the Caris Healthcare hospice professionals. We would like to express great thanks to Dr. Janet Rice and her wonderful team. We would like to greatly thank Dixie Dougherty for all her years of helping mom at her home. Friends and family will be able to say a prayer, as Wilma requested, at the State Street United Methodist Church Chapel, and the family will receive friends in the adjacent Narthex and Parlor on Tuesday, June 11, 2019 from 5:00 PM -7:00 PM. In lieu of flowers, please consider a memorial contribution to Crossroads Medical Mission, c/o State Street United Methodist Church, 300 West Valley Drive Bristol, VA 24201, Healing Hands Health Center, 245 Midway Medical Park, Bristol, TN 37620, or Girls Inc. of Bristol VA, 613 Highland Ave., Bristol, VA 24201. Arrangements especially for Ms. Fletcher and her family have been made through Oakley-Cook Funeral Home & Crematory.

Wilma Boothe Fletcher, born June 3, 1935 in Christiansburg, VA went to heaven on June 7, 2019. After several strokes and her second colon cancer in 2012, Wilma then resided at NHC Healthcare Bristol until her passing. Despite being bedridden... View Obituary & Service Information

The family of Wilma Boothe Fletcher created this Life Tributes page to make it easy to share your memories.

Send flowers to the Fletcher family.