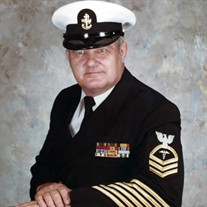 William Edward “Doc” West, 89, of Johnson City, Tenn., passed away on Thursday, October 22, 2020 at Franklin Woods Community Hospital. He was born in Springfield, Ohio on September 21, 1931, the son of the late Ellis McKinley and Minerva Ruth McCardy West. Along with his parents, he was preceded in death by his sister, Clara Downs; and granddaughter, Kari West. Doc was a U.S. Navy Veteran. He was a U.S. Navy Corpsman for 30 years and served his country in the Korean and Vietnam Wars. He attended Wesley Memorial United Methodist Church in Johnson City. Doc was a lifetime member and Chaplain of the VFW, President of Sweetwater Hospital Volunteers, and a member of the American Legion and Monroe County Honor Guard. He is survived by his loving wife of 54 years, Jo Carolyn James West; daughter, Carolyn Coleman and husband Lynn; sons, Jim West and wife Susan and Steve West and wife Fran; daughter, Sue Miller and husband Terry; nine grandchildren; seven great grandchildren; and one great great grandchild. A Celebration of Life will be held at 2:00 p.m. on Monday, October 26, 2020 at Wesley United Methodist Church in Johnson City, Tenn. with Pastor Gerald Casson officiating. Military honors will be provided by the Daniel Boone High School Junior ROTC. A private committal and inurnment will be held at Mountain Home National Cemetery in Mountain Home, Tenn. In lieu of flowers, donations may be made in memory of Mr. West to the Holston United Methodists Home for Children, 404 Holston Drive, Greeneville, TN 37743. Arrangements especially for Mr. West and his family have been made through Oakley-Cook Funeral Home & Crematory.

The family of William Edward "Doc" West created this Life Tributes page to make it easy to share your memories.

Send flowers to the West family.