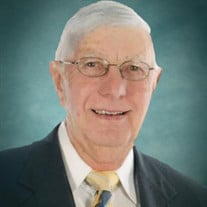 William Gwyn “Bill” Templeton, 86, of Bristol, TN passed away Friday, March 15, 2019 at Ballad Hospice in Bristol, TN. He is preceded in death by his parents, David Peden and Kathleen Hunter Templeton; his loving wife of 51 years, Pauline Lewis Templeton; sister, Virginia “Gee” Mauney; and brother, David Peden Templeton, Jr. Bill was an amazing husband, father and grandfather. He was instrumental in the lives of his children and grandchildren and was always involved in their activites. He was heavily involved in the TPA and was a mason and member of King Masonic Lodge #461. Bill was a graduate of Tennessee High School Class of 1950. He worked for several years at Raytheon and went on to hold several successful sales jobs before going on to retire from Huff Cook/Settlers Life as manager after a 35 year career. He was an avid golfer and a fan of all sports. He is survived by daughter, Sandra Templeton Murphy and husband Alan; son, Billy Templeton and wife Kathy; daughter, Trish Templeton; daughter, Gwyn Templeton Brassell and husband David; daughter, Beth Templeton Mann and husband Tom; grandchildren, Sara, Alison and A.J. Murphy, Zack and Nicholas Brassell, Parker and Emily Mann; and beloved nieces and nephews, Hugh Mauney, Karen Mauney O’Regan, Connie Templeton Kee, Kathy Templeton Patterson and David Templeton, III. The family will receive friends on Sunday, March 17, 2019 from 2:30 PM until 4:00 PM at Oakley-Cook Funeral Home in Bristol, TN. The funeral service will follow at 4:00 PM with family friends Brian and Rebecca Reynolds officiating. The committal service and interment will be held at 11:00 AM on Monday, March 18, 2019 at Glenwood Cemetery in Bristol, TN. Special friends of Bill will serve as an honorary pallbearers, Dick Henson, Kenneth Tester, Hugh Mauney, Brent Buchanan, and Doug Gillenwater. The family would like to extend a special thanks to Bill's caregiver; Kay Thompson, for the amazing care she provided over the last two years. Arrangements especially for Mr. Templeton and his family have been made through Oakley-Cook Funeral Home & Crematory.

William Gwyn &#8220;Bill&#8221; Templeton, 86, of Bristol, TN passed away Friday, March 15, 2019 at Ballad Hospice in Bristol, TN. He is preceded in death by his parents, David Peden and Kathleen Hunter Templeton; his loving wife of 51 years,... View Obituary & Service Information

The family of William Gwyn "Bill" Templeton created this Life Tributes page to make it easy to share your memories.

Send flowers to the Templeton family.