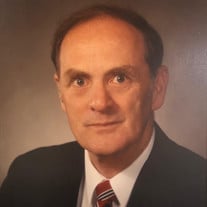 W. Curtis Burnette, 89, passed away on October 3, 2019. He was born in Bristol, TN on July 22, 1930 and spent his entire life in Bristol with the exception of four years at Virginia Tech and three years in the Army. While in service he spent eighteen months in Korea as NCOIC of the Cryptographic Center Headquarters Company of the 501st Army Security Agency. Mr. Burnette graduated from Tennessee High in 1949, and VA Tech in 1954 with a BS in Industrial Engineering. In 1966 he received an MA in Industrial Engineering from the University of Tennessee. He took graduate courses in Economics and Education at ETSU. He was preceded in death by his parents, Bryan Burnette and Margaret Blevins Burnette; daughter, Terry Burnette; sister, Marie Fox; and parents-in-law, Otto and Gretel Holzer of Milligan College. He is survived by his loving wife of 60 years, Charlotte Holzer Burnette; son, Otto Curtis Burnette and wife Christine of Irmo, SC; and daughter, Tracy Pierce and husband Bill of Bristol. His grandchildren are Marigold Wilson and husband Kevin of Lexington, SC, Thomas Burnette and wife Amanda of Anderson, SC, Stuart Burnette and wife Alison Baskerville, and Brian Burnette of Columbia, SC, Dustin Pierce and wife, Kinari, and Mackay Pierce of Washington, DC. Also, nieces, Rene Scott and Diane Conley; and nephew, Bryan Fox. After completing his tour in service, he was employed by Sperry Corporation as an Industrial Engineer. He spent thirty years with Sperry in Bristol where he was Director of the facility when the plant closed in 1987. Rather than accept a position as VP of Operations in Minnesota, he took early retirement and remained in Bristol. He then was employed by the GenCorp Aerojet Ordnance in Jonesboro, TN as Vice President and General Manager of that facility. He retired from that position in 1996. Curtis felt a strong commitment to volunteer work in the community and served with the following organizations: Bristol TN Planning Commission, Zoning Board of Appeals, Bristol TN School Board (eight years), Bristol TN/VA Chamber of Commerce (Chairman, one year), Johnson City Chamber of Commerce, The United Way in Bristol and Johnson City, Board of Directors of the Bank of America (Tri-Cities), ETSU Foundation, NESTCC FOUNDATION, Watauga Regional Mental Health, National Center for Quality, and Advisory Board of the Quillen School of Medicine. An honor very special to him was selection as a member of the All Tennessee School Board. Charlotte and Curtis loved travel, camping, hiking, playing bridge and South Holston Lake. Curtis played golf most of his life, starting as a caddy at the old Blue Ridge Golf Course. Many of his best friendships were made on the golf course, at the bridge table and at the “unclub” lunch bunch. The family will receive friends from 5:00 until 7:00 PM on Saturday, October 5, 2019 at Oakley-Cook Funeral Home in Bristol, TN. A Funeral Service will be held at 2:00 PM on Sunday, October 6, 2019 in the Heritage Chapel of Memories at Glenwood Cemetery in Bristol, TN with Jim Jordan officiating. The committal service and entombment will follow. Military honors will be rendered by VFW Honor Guard Post #6975. In lieu of flowers, please consider a gift to the Terry Burnette Art Scholarship at the University of Tennessee. Checks payable to the UT Foundation, memo line: IMO Mr. Curtis Burnette/F010000740 and may be sent to: UT Foundation, Attn: Jane Gulley, 1408 Middle Drive, Knoxville, TN 37996. Arrangements especially for Mr. Burnette and his family have been made through Oakley-Cook Funeral Home & Crematory.

W. Curtis Burnette, 89, passed away on October 3, 2019. He was born in Bristol, TN on July 22, 1930 and spent his entire life in Bristol with the exception of four years at Virginia Tech and three years in the Army. While in service he spent... View Obituary & Service Information

The family of William Curtis Burnette created this Life Tributes page to make it easy to share your memories.

Send flowers to the Burnette family.