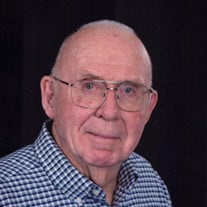 Not sure what to send?

William Rex "Jerry" Blackburn Jr., 89, of Bristol, Tenn., died on May 20, 2022, peacefully at home. He is survived by his wife of more than 64 years, Jean Blackburn, who took extraordinary loving care of him in the last years of his life. He... View Obituary & Service Information

The family of William Rex "Jerry" Blackburn Jr. created this Life Tributes page to make it easy to share your memories.