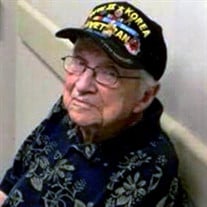 Victor Hugo Friend, Jr., age 93, of Bristol, TN, departed his earthly home peacefully on Wednesday, August 22, 2018. Surrounded at his home by his loving family, he entered praising and rejoicing into heaven. He was born on December 22, 1924 in Roanoke, VA, a son of the late Victor Hugo Friend, Sr. and Emily Pearl Friend. In addition to his parents, he was preceded in death by his brother, Robert M. Friend; grandson, Andrew Victor Gilliam; and grandson-in-law, Lee Dobbs. Victor joined the U.S. Navy at the age of 17 and served aboard the USS Yorktown in the South Pacific during World War II and the Korean War. Following his service for our country, he graduated from Bluefield College with a degree in business. While there, he met the love of his life, his sweetheart, Betty Jean Culler. Upon their very first encounter he asked her, “Where have you been all my life?” They were married on September 2, 1950, and would have celebrated their 68th anniversary in just a few days. He retired from Sovereign Pocahontas in Bluefield, WV. Following his retirement, he enjoyed traveling and spending time with his wife and family. He never met a stranger and was loved by everyone. He is survived by his loving wife of 67 years, Betty Jean Friend; daughter, Candace Friend Hutton and husband Kenneth of Kingsport, TN; three sons, Kary Friend of Kernersville, NC, John W. Friend and wife Brenda of Bristol, VA, and David Friend of Bristol, TN; sister, Peggy Harris of Raleigh, NC; and cousins, Barbara Carper and Phyllis Martin. He was greatly loved by his 11 grandchildren, 23 great grandchildren, nieces, nephews, and a multitude of other family and friends. A Celebration of Life Service will be held at 10:00 AM on Friday, September 7, 2018 at Parkway Baptist Church in Bristol, TN with Pastor Randy Gilliam officiating. The committal and inurnment will be held in Mountain Home National Cemetery at 1:00 PM in Mountain Home, TN. The family wishes to extend special thanks to the staff of Bristol Regional Medical Center ICU and 2nd Floor, ETSU Family Physicians, Mountain States Hospice, and everyone that took such great care of Victor. In lieu of flowers, the family requests that memorial contributions be made to St. Jude Children’s Research Hospital, Memorials Processing, 501 St. Jude Place, Memphis, TN 38105-9959. Arrangements especially for Mr. Friend and his family were made through Oakley-Cook Funeral Home & Crematory.

Victor Hugo Friend, Jr., age 93, of Bristol, TN, departed his earthly home peacefully on Wednesday, August 22, 2018. Surrounded at his home by his loving family, he entered praising and rejoicing into heaven. He was born on December 22, 1924... View Obituary & Service Information

The family of Victor Hugo Friend Jr. created this Life Tributes page to make it easy to share your memories.

Send flowers to the Friend family.