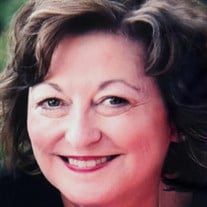 Vicki Taylor Viers, age 60, of Bristol, TN, passed away on February 22, 2021 at Bristol Regional Medical Center with her husband and son by her side. Vicki was born on September 19, 1960 in Marion, VA to Doris Kelly Taylor and William Earl Taylor. She spent her early years in Marion and had many fond memories of her childhood there. Vicki graduated from Holston High School in Damascus in 1978 and East Tennessee State University with a BS in Juvenile Counseling (Cum Laude) in 1982. Vicki married her husband Bob on September 19, 1984 in the Chapel at Emory & Henry College. Vicki and Bob moved to Bristol in November 1985 and built their life together. They were blessed with 2 Sons, Grae in 1989 and Drew in 1993. Vicki was the consummate mother loving, strong, and kind. She immersed herself in motherhood and filled whatever role was needed: class mom, team mom, or neighborhood mom: she relished each one. Vicki was active in the Junior League, Child Study Club, and on numerous projects at State Street United Methodist Church. Vicki was a member of the Mountain Empire Tennis Association (META) and traveled across the region and state playing competitive tennis and making many good friends. Vicki loved spending time with her family and friends on South Holston Lake, at the Beach, or around the table. She enjoyed her flowers and watching her back yard birds. Vicki is preceded in death by her son, Graeson Blaine Viers; mother, Doris Kelly Pentecost; father, William Earl Taylor; stepfather, Elbert Thomas Pentecost, Jr.; father-in-law, James Robert Viers; brother-in-law, Ron Wallace; and her beloved childhood guardians, Horton and Juanita Parks. Those left to mourn Vicki’s passing and treasure her memory include her husband of 36 years, J. Robert Viers, Jr.; beloved son, Robert Andrew (Drew) Viers (Knoxville); mother-in-law, Patricia Viers (Dublin, VA); sisters, Donna Wallace (Bristol) and Angie Pentecost (Hendersonville, NC); brother-in-law, Jeff Viers (Rebecca) (Dublin, VA); special aunt, Shirley Asbury (Tom) of Bristol; and several cousins, nieces, and nephews. Vicki also leaves behind her constant companions, her puppies Gus and Frank. Vicki was blessed with an incredibly special group of friends that she looked upon as family and their love and support gave her great joy and comfort. A Celebration of Life will be held on Saturday, February 27, 2021 from 4:00 PM to 6:00 PM at the Foundation Event Facility, 620 State Street Bristol, TN. In lieu of Flowers, memorials may be sent to Bristol TN City Schools, The Connection Family Resource Center, PO Box 3868, Bristol, TN 37625-3868, Crossroads Medical Mission, PO Box 16852, Bristol, VA 24209-6852, Imagination Library at imaginationlibrary.com, or a charity of your choice.

Vicki Taylor Viers, age 60, of Bristol, TN, passed away on February 22, 2021 at Bristol Regional Medical Center with her husband and son by her side. Vicki was born on September 19, 1960 in Marion, VA to Doris Kelly Taylor and William Earl... View Obituary & Service Information

The family of Vicki Taylor Viers created this Life Tributes page to make it easy to share your memories.

Send flowers to the Viers family.