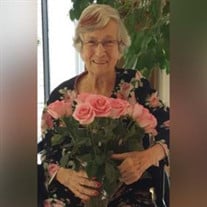 Thelma Elizabeth “Beth” Warner, 88, left this earth from her home in Blountville, TN on February 28, 2020, surrounded by her loving family. She was born on May 19, 1931 in Westminster, MD, to Edgar George Levi and Ruth Marie (Wimert) Barber. Her greatest joys on her journey of love and light were her family. Beth lived in the eastern and mid-western U.S. before moving to Port Charlotte, Fla., where she began working as an Office Administrator for Richmond Homes. She learned the business, working her way up to Construction Manager for the company. Pioneering in the early 1980’s, she opened her own company, becoming the first woman licensed contractor in the area to have her own residential construction company, and was fondly known as “The Lady Builder.” She was active in the 5 County Builders and Contractors Association. At 60, she went back to school to become a massage therapist. She also became a CranioSacral practitioner and was a Teaching Assistant for Dr. Upledger at the renowned Upledger Institute. Additionally, Beth became a Reiki Master, and offered a variety of holistic healing modalities in Leesburg, VA, and later in Blountville, TN, as well as in other U.S. and international locations, until her retirement. Beth loved Native American culture, traditions and peoples, supporting the opening of the Native American Museum on the National Mall, and sponsoring a Native child, “Willy”. Beth is survived by her children, Robert Talmadge (Noel Marshall) Warner, Janet Lynn (Peter) Bell, Richard Charles Warner and Kyle Edward Warner; 11 grandchildren; and 16 great-grandchildren. Along with her parents, she was preceded in death by her daughter, Judith Anne Talmadge; and two husbands, Robert Hasson Talmadge and Howard Charles Warner. In lieu of flowers, memorial contributions may be made to the American Indian Education Fund by visiting https://bit.ly/2I8LRgl. Arrangements especially for Ms. Warner and her family have been made through Oakley-Cook Funeral Home & Crematory.

The family of Thelma Elizabeth "Beth" Warner created this Life Tributes page to make it easy to share your memories.

Thelma Elizabeth “Beth” Warner, 88, left this earth from her...

Send flowers to the Warner family.