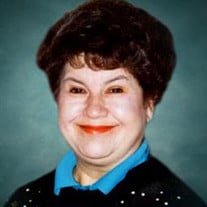 Sheila Margaret Leonard, 81, of Bristol, TN, passed away on November, 30, 2018 at Bristol Regional Medical Center following a brief illness. Mrs. Leonard was born on February 23, 1937 in Cambridge, England, a daughter of the late David and Mary Lemon. She spent her formative years in Ely, England and moved to the United States in 1956. Sheila retired from the Bristol Herald Courier where she held a number of positions, first as a proofreader and finally as a switchboard operator. After her retirement, she volunteered at the Bristol Regional Medical Center. Sheila was a faithfully serving member of Meadowview Presbyterian Church in Bristol, TN. She was also a member of the Transatlantic Bride and Parents Association and enjoyed having tea with the English ladies. Sheila was devoted to her native land of England and visited family and friends there whenever possible. She also loved spending time with her grandchildren. She is preceded in death by her husband of 59 years, Wayne Allen Leonard. Sheila and Wayne met while he was stationed in England with the United States Air Force. Left to cherish her memory are her two sons, David Wayne Leonard and wife Debra of Bristol, TN and Andrew S. Leonard and wife Annette of Lebanon, VA; three granddaughters, Jamie Johnson and husband Josh and their daughter Amiah of Piney Flats, TN, Andrea Jimenez and husband Tyler of Jonesborough TN, and Stephanie Leonard of Charlotte, NC; brother, Ron Lemon and wife Ann of Ely, England; sister, Pamela Wright and husband Roger of Histon, England; and several nieces and nephews. The family will receive friends on Tuesday, December 4, 2018 from 5:00 PM to 7:00 PM at Oakley-Cook Funeral Home in Bristol, TN. A Celebration of Life service will follow at 7:00 PM with Pastor Bobby Meadows officiating. In lieu of flowers, memorial contributions may be made to the Bristol Regional Medical Center Volunteer Auxillary, 1 Medical Park Blvd, Bristol, TN 37620. The family would like to thank the dedicated doctors and nurses at the Intensive Care Unit at the Bristol Regional Medical Center. Also the family would like to extend a special thank you to Sheila’s dear friend, Shirley Newland. Arrangements especially for Mrs. Leonard and her family have been made through Oakley-Cook Funeral Home & Crematory.

Sheila Margaret Leonard, 81, of Bristol, TN, passed away on November, 30, 2018 at Bristol Regional Medical Center following a brief illness. Mrs. Leonard was born on February 23, 1937 in Cambridge, England, a daughter of the late David and... View Obituary & Service Information

The family of Sheila Margaret Leonard created this Life Tributes page to make it easy to share your memories.

Sheila Margaret Leonard, 81, of Bristol, TN, passed away on November,...

Send flowers to the Leonard family.