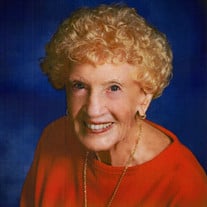 Ruby Virginia Stevens Brown passed from this life into eternal rest on January 6, 2020. Her heart was forever broken on February 20, 2012 with the passing of her beloved spouse of 69 years, James H. (Jim) Brown. Now she has taken her rightful place by his side in heaven. It is with this knowledge that we are assured they are again smiling, walking hand in hand, and looking down on their family. Born in Abingdon, Va., the first of three daughters to Thomas Lawton and Mary Counts Stevens, Ruby spent most of her early life in the Abingdon area where she attended local schools. Her God given gift of a beautiful singing voice was noticed early on by a vocal coach who taught her in the years before she graduated from William King High School. Ruby continued to take voice lessons while attending Bristol Commercial College, and continued her higher education at Sullins College and East Tennessee State University before receiving her degree in music. She met and fell in love with a handsome young man from the Green Springs community and they married July 10, 1943. Much of her early married life revolved around making a home at the various duty assignments where her U.S. Marine Corp husband was stationed. After 30 years in the Corp, the family returned to the Bristol area where Ruby taught at John Battle High School and Virginia High School. In the mid-1950‘s, the family joined Central Presbyterian Church. Ruby was active in many areas of church life. She carried on her love for music by singing in the Chancel Choir, and once directed the youth choir. Lovingly known as the “hugging lady” at Central, it was always her way of greeting friends and strangers alike with outstretched arms. Ruby was bestowed a lifetime membership for the Presbyterian Women. She and Jim joined the 55+ Group for several of their outings. Together, they volunteered many hours to the Food Pantry, Soup Kitchen and Meals on Wheels. Mrs. Brown was an active member of the Bristol Woman’s Club before it was disbanded, and held various leadership positions in that organization. She also enjoyed Bridge Club and a variety of craft activities including helping in the design and construction of the lovely banners adorning the church. Ruby was predeceased by her husband, Jim; parents, Mary and Tom Stevens; and sisters, Helen A. Stevens and Anne Stevens Sparks. She is survived by daughter, Cheryl Perry and husband Joe of Land O’Lakes, Fla.; son, James Christopher Brown and wife Debra of Bristol, Va.; three grandchildren; two step grandchildren; eleven great grandchildren; one aunt; several nieces and nephews; and many friends. The family will receive friends from 5:00 to 7:00 pm on Saturday, January 11, 2020 at Central Presbyterian Church in Bristol, Va. A celebration of life for Ruby Virginia Stevens Brown will be held at 2:00 pm on Sunday, January 12, 2020 at Central Presbyterian Church with Rev. Ann Aichinger officiating. A private entombment will be held at Forest Hills Memory Gardens Mausoleum in Abingdon, Va. In lieu of flowers, the family requests that donations be made to the Music Memorial Fund at Central Presbyterian Church, 301 Euclid Avenue, Bristol, VA 24201 or the Parkinson’s Foundation (200 SE 1st Street, Suite 800, Miami, FL 33131. The family would like to extend special thanks to Mrs. Brown's caregivers with Home Instead, especially Betty Hurt, for their care. Also to Alyson, Jackie, Wanda, and Peggy. They would also like to express their appreciation to New Century Hospice of Wytheville, VA. Condolences and memories may be shared with the family and viewed by visiting www.oakley-cook.com. Arrangements especially for Mrs. Brown and her family have been made through Oakley-Cook Funeral Home & Crematory.

Ruby Virginia Stevens Brown passed from this life into eternal rest on January 6, 2020. Her heart was forever broken on February 20, 2012 with the passing of her beloved spouse of 69 years, James H. (Jim) Brown. Now she has taken her rightful... View Obituary & Service Information

The family of Ruby Virginia Stevens Brown created this Life Tributes page to make it easy to share your memories.

Ruby Virginia Stevens Brown passed from this life into eternal...