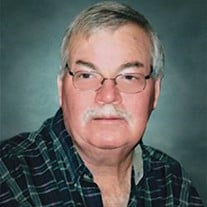 Roy Wesley “Wes” Brewer, age 63, of Bristol, TN, passed away on Friday, September 27, 2019 at Ballad Hospice House in Bristol, TN. He was born on September 29, 1955, a son of the late Ronel and Louise Brewer. In addition to his parents, he is preceded in death by sister, Martha Lewis; brothers, Johnny, Larry and David Brewer; and grandson, Weston Casey Ramsey. Wes was employed by Wheeler Material Handling, formerly known as Yale Carolina, for 30 years until his retirement. He is survived by his loving wife of 21 years, Robin; sons, Dustin Brewer, Brian Ramsey and wife Christy, and Casey Ramsey and wife Jolee; brother, Ron Brewer and wife Mary Lou; sisters, Cathy Sellars and Karen Worley; and grandchildren, Desi White, Maddy Ramsey, Brayden Ramsey, Jayden Ramsey and Raylan Brewer. In keeping with Wes’ wishes, there will be no formal services. The family would like to extend special thanks to the staff of Ballad Hospice, Dr. Rebecca Waterman, and special friend Freyda Osborne. Arrangements especially for Mr. Brewer and his family have been made through Oakley-Cook Funeral Home & Crematory.

The family of Roy Wesley "Wes" Brewer created this Life Tributes page to make it easy to share your memories.

Send flowers to the Brewer family.