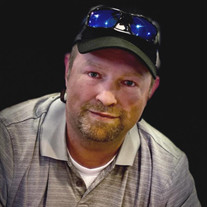 Roscoe Frank Brock, Jr., 40, of Bluff City, TN passed away on Saturday, April 4, 2020. He was born on December 4, 1979, the son of Virginia Broadway Brock and the late Roscoe Frank Brock, Sr. Roscoe was a loving husband, father, son, brother and friend. He loved his kids very much and was the best Daddy. Roscoe was born and raised in North Carolina before moving to Tennessee 7 years ago. He was a member of Piney Flats First Baptist Church. He loved to hunt, fish, cook, woodworking, raise chickens, and gardening. He is survived by his loving wife of 12 years, Ashley Brock; daughter, Dallas Morrow; son, Austin Brock; daughter, Skylar Brock; son, Hunter Brock; daughter, Finley Brock; mother, Virginia “Jenny” Brock; sisters, Echo Deese and husband Tommy, and Wanda Thomas and husband Ricky; mother and father-in-law, Tammy and Charles Wyatt; brother and sister-in-law, Brad and Glory Broyles; brother and sister-in-law, Zach and Olivia Wyatt; along with several nieces and nephews. Due to the COVID-19 concerns, the family will hold a visitation and service at a later date. On behalf of the family and during these unprecedented times, continue to support them through this loss by sending cards, messages, making phone calls or placing on-line condolences until formal services are held. Arrangements especially for Roscoe and his family have been made through Oakley-Cook Funeral Home & Crematory.

The family of Roscoe Frank Brock, Jr. created this Life Tributes page to make it easy to share your memories.

Send flowers to the Brock family.