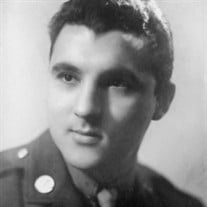 Robert Jennings Williams, age 98, of Bristol, VA, went to be with the Lord on June 26, 2020 peacefully at his home. He was born on February 6, 1922, a son of the late Homer and Geneva B. Williams. Along with his parents, he was also preceded in death by his loving wife of 71 years, Betty Jean Young Williams; infant son, Stephen Williams; and sister, Eula Williams. Robert was a caring husband, father and grandfather. He was a Veteran of the U.S. Army Air Corp. having served his country in World War II where he was an Army Airplane Mechanic. While in the service he was awarded the Good Conduct Medal and the European-African-Middle Eastern Service Ribbon. Throughout his career, Robert was a supervisor at The Williams Company for many years and retired from Bristol Metals. He loved taking care of his family and animals. In his spare time, Robert enjoyed working on his lawn and in his younger years he loved being at the lake. He is survived by his son, Robert R. “Bobby” Williams and wife Lois; daughter, Teresa “Terry” Williams Klepper; grandchildren, Michelle L. Hughes, Christina Potter and husband Kyle, Christopher Klepper and Heather Klepper; great grandchildren, Brandon Arnold and wife Char-leigh, Joshua Arnold and wife Shelby, Todd Neely and fianceé Grace Pentecost, Aric Neely, Gavin Potter and Emma Potter; great great granddaughter, Vivian Arnold; and the best dog ever, Megan. Due to current health concerns regarding COVID-19, no formal services will be held. In lieu of flowers, memorial contributions may be made to The Bridge Home No Kill Animal Rescue, P.O. Box 654, Blountville, TN 37617. The family would like to extend special thanks to all of the family members, his ‘Tribe’, who helped care for him, his pulmonologist Dr. Michael Bergman and the staff of UVA. Arrangements especially for Mr. Williams and his family have been made through Oakley-Cook Funeral Home & Crematory.

Robert Jennings Williams, age 98, of Bristol, VA, went to be with the Lord on June 26, 2020 peacefully at his home. He was born on February 6, 1922, a son of the late Homer and Geneva B. Williams. Along with his parents, he was also preceded... View Obituary & Service Information

The family of Robert J. Williams created this Life Tributes page to make it easy to share your memories.

Send flowers to the Williams family.