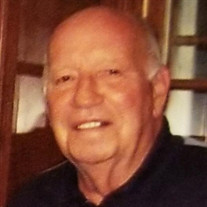 Robert “Bob” Brooks, 80, of Bristol, TN, passed away Friday, May 3, 2019 at Ballad Hospice House in Bristol, TN. He was born in Lowell, MA on February 24, 1939, to Raymond and Bertha Beault Brooks. He was also preceded in death by his parents; his wife, Carol Bowers Brooks; and brothers, Raymond Brooks and Richard Brooks. Bob was a loving father, grandfather, brother and friend. He was retired from Raytheon after 35 years of service. One of his favorite pastimes was being at his campsite at the RBAA Park and boating on Boone Lake with family and friends. Bob was an avid NE Patriots and Boston Red Sox fan. He is survived by his daughter, Cathy Orfao and husband Philp of Manchester, NH; sons, Robert Brooks and fiancé Amy of Plano, TX, Michael Brooks and wife LaVene of Burleson, TX, and Daniel Brooks and wife Angela of Arlington, TX; stepdaughter, Lynn Arias of El Paso, TX; 25 grandchildren; 15 great grandchildren; and brother, Russell Brooks of FL. Bob was grateful to love and be loved by his longtime companion, Dot Arnold. A memorial service will be held at 2:00 PM on Saturday, May 18, 2019 at Oakley-Cook Funeral Home in Bristol, TN. In lieu of flowers, memorial contributions may be made to Ballad Hospice, 280 Steeles Road, Bristol, TN 37620. Arrangements especially for Mr. Brooks and his family have been made through Oakley-Cook Funeral Home & Crematory.

The family of Robert "Bob" Brooks created this Life Tributes page to make it easy to share your memories.

Send flowers to the Brooks family.