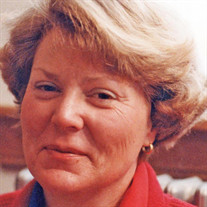 Dr. Rebecca Waddell Tulloch, age 74, of Blountville, Tenn., passed away Sunday, August 30, 2020 at Christian Care Center of Bristol. Rebecca was the daughter of Clyde and Ruth Waddell of Concord, N.C. and later Bristol, Tenn. She is survived by her husband of 29 years, John Stadler Tulloch; sister, Patricia Waddell Bolling; nieces, Teresa Mills and Pam Dunn; and nephew, Eddie Bolling. Rebecca graduated from Concord High School and continued her education at Catawba College in Salisbury, N.C. She was a gifted student and went on to the University of Tennessee, graduating with a doctorate in Chemistry in 1974. Following her graduation from the University of Tennessee, Rebecca took a position with the DuPont Company in Wilmington, Del. where she worked for 29 years. Her initial assignment was in DuPont’s development laboratory. Following that assignment she was made laboratory director at DuPont’s facility in Repaupo, N.J. From there she moved to Cleveland, Ohio where she was assigned to visited customers and provided technical assistance. In her spare time while in Cleveland, Rebecca took up flying and earned her commercial pilot license. Upon returning to Wilmington, she was assigned to the Coating and Pigment Department and became an internationally known expert, serving primarily the automotive industry. In 1990, Rebecca decided to return to the academic environment and continue her education, this time in Law. She enrolled in the Widener School of Law in Wilmington, Del. and at the same time continued her employment with DuPont. This was made possible by taking all of her classes at night and she graduated in 1992 with her Law degree. Rebecca was admitted to the Delaware Bar, the Pennsylvania Bar and the Maryland Bar, and because of her technical background, was also admitted to the Patent Bar. As a consequence of her Law degree and admittance to the Patent Bar, Rebecca was able to continue her employment with DuPont as a patent attorney until her retirement in 2003. After retirement, Rebecca continued to use her legal skills. She volunteered at local Legal Aid agencies on a pro bono basis and was elected Mayor of Odessa, Del., serving two terms. Prior to moving to Bristol, Rebecca set up a Mediation Office for Cecil County, Md. Once Rebecca was settled here in the Bristol area, she continued her service in the community by volunteering at the Bristol Library teaching English as a Second Language. She also took a teaching position at Highlands Community College where she taught Chemistry. Rebecca was a Rotarian both here and in Del., and she truly believed in Service ABOVE Self.” The family will hold a Celebration of Life Service for Rebecca at a later date. In lieu of flowers, memorial contributions may be made to Christian Care Center of Bristol, 2830 Highway 394, Blountville, TN 37617, or to the charity of your choice. Arrangements especially for Dr. Rebecca Tulloch and her family have been made through Oakley-Cook Funeral Home & Crematory.

The family of Dr. Rebecca Waddell Tulloch created this Life Tributes page to make it easy to share your memories.

Send flowers to the Tulloch family.