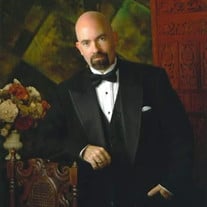 Ray Logan Brown, Jr. went to Heaven to be with his Lord and Savior on Sunday, July 5, 2020 after a brief illness. He was preceded in death by his parents, Ray Logan Brown, Sr., and Janie P. Brown, “Peg,” and by his beloved husband, Michael E. Puckett. He is survived by his sister, Lucinda Brown, aunts and uncles, and many cousins, and by his dogs, Roxie, Izzy and Razzle. Due to the COVID-19 pandemic, there will not be a service at this time but, in lieu of flowers, if you would like to remember Logan, please make a gift in his memory to For Pete’s Sake Rescue, PO Box 1982, Bristol, TN 37621-1982. To our family, Logan was just Joey, his childhood nickname. But to the world of music, he was "one of the most talented and passionate musicians that ever lived." That statement is only one of the many hundreds of tributes that have been posted honoring his memory. We knew he was a talented pianist. But as we read the posts from all over the world from fellow artists who worked with him and students whose lives and careers were changed and formed as they learned from him, it is clear that we did not truly comprehend the extent of his gift, or as one singer put it, his "magic." Logan slipped the surly bonds of earth Sunday night, July 5, from complications following a massive heart attack on June 29. Here are just a few more comments in his memory..... ''Logan was the most brilliant pianist I’ve ever known." "Logan Brown was a world class artist and the greatest musical director and accompanist I’ve ever known." "He was truly a musical, keyboard genius." "He was a man of unimaginable talent and musical proficiency, and I know I will never come across another person quite like him." "His spirited piano playing skills were unlike any other." "Logan Brown was an extraordinary musician who was a brilliant pianist, musical director and musical coach. He was also the finest accompanist I have ever performed with." "Both the world of music and the world itself is poorer for his loss." "His integrity, his honesty his empathy, his brilliance, and his compassion were truly remarkable and admirable." "Never have I known an artist so extremely proficient not only in their skills, but in their proficiency to open the heart and spread love." "You could put any piece of music under the sun in front of this man and he could sight read it perfectly!! I know it was due to how dedicated he was in his practice, but I really believe there was some magic going on there. For all of his passion to the music he played for himself and for others, I look up to him endlessly." "To the friend I will miss, and the mentor who made me who I am today: May you rest in peace knowing you were loved." Logan Brown attended Baylor University and ETSU where he majored in Piano and Voice. He was in demand as a music director and accompanist and collaborated in masterclasses with opera legends Paul Plishka, Benita Valente, John Alexander, Frank Little, Tito Capobianco, Renata Scotto, Mignon Dunn, Stella Zambalis, Evelyn Lear, Thomas Stewart, Sherrill Milnes, Carol Sparrow, and Randolph Locke among others, and accompanied Ms Zambalis, Mr. Milnes, Jason Stearns, Ms. Sparrow and Mr. Locke. He also worked with Maestros Anton Coppola, Daniel Lipton, Paul Nadler, Thomas Pasatieri, Tim Seelig, and Imre Pallo. In addition, he played Carlisle Floyd’s music for the composer. He had the honor of assisting with musical preparation as accompanist/pianist for the European premiere of Sing for the Cure at London’s Royal Festival Hall in May 2009 under the direction of Dr. Tim Seelig and participated in a concert commemorating Dr. Seelig’s retirement from the Turtle Creek Chorale at Meyerson Symphony Hall in Dallas which was recorded. While on staff at Milwaukee’s Skylight Music Theatre (formerly Skylight Opera Theatre), he worked as Music Administrator and Resident Artist Coordinator as well as rehearsal pianist and was a featured orchestra member in the PBS telecast of Skylight’s production of Copland’s The Tender Land as well as arranging a well-received cabaret featuring the music of Jerome Kern, George Gershwin and Irving Berlin. Many of his performances have been aired on public radio. He served on the staff of the Broadway Theatre Project for many years as an Assistant Music Director/Arranger where he worked closely with Broadway luminaries including Ben Vereen, Nancy Dussault, Dave Clemmons, Patrick Wilson, Paige Davis, Jonathan Groff, and composer Frank Wildhorn. He also accompanied Mickey Rooney and Mr. Rooney’s wife, Jan, in their “One Man One Woman” show. In February of 2006, he made his debut at Carnegie Hall in New York as accompanist (When We No Longer Touch) and singer (Sing for the Cure), under the direction of Dr. Seelig. He was also a staff accompanist for the OASIS Young Artist Program with Carol Sparrow and Randolph Locke, and on staff as an accompanist for the International Vocal Arts Institute, working with the Met’s Joan Dornemann. He was especially close to Sherrill Milnes and Maria Zouves’ vocal program, VOICExperience, playing recitals, lessons, and masterclasses in Orlando, Tampa and Savannah. In addition, he was also the accompanist for many community choruses, and his original compositions and arrangements were heard at GALA Festivals in San Jose, Montreal, Miami, and Denver. For many years, he traveled extensively as a Music Director for a vast number of musical theatre productions across the country in styles ranging from Sweeney Todd and Candide to Godspell and the Nunsense musicals. Until May of 2017, he spent 14 years as the Staff Accompanist for the Pinellas County Center for the Arts at Gibbs High School in St. Petersburg, FL and was a freelance pianist/accompanist in the greater Tampa area where he was well-known for his sight-reading abilities. He moved back to Bristol, VA in the Fall of 2017. Arrangements especially for Logan and his family were made through Oakley-Cook Funeral Home & Crematory.

The family of Ray Logan Brown, Jr. created this Life Tributes page to make it easy to share your memories.

Ray Logan Brown, Jr. went to Heaven to be with his Lord and Savior...