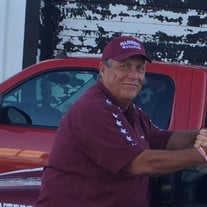 “With God all things are possible.” -Matthew 19:26 Randy Warren, 59, of Bluff City, Tennessee finished the race and went home to be with the Lord on July 26th, 2018. Randy led an extraordinary life as a race car driver and stunt man winning hundreds of races and performing car stunts for film and international tours. Most recently, he frequented Bristol Motor Speedway and other tracks with his family stunt show, Warren’s Stunts, where he and his family performed two-wheel stunts and he shared his testimony with thousands of people. Randy had an unshakable faith in God and loved to share his faith with others. He was a member of Common Ground Church in Bristol and was a strong spiritual leader for his friends and family. Randy was a loving family man who was married to the love of his life, Sherral Warren, for 38 years. He was preceded in death by his parents, Gayle Hubert Warren and Betty Ann Coe; brother, Gayle Warren, Jr.; sister, Brenda Warren; brother, Dickie Waddel; and stepmother, Della Warren. He is survived by his wife of 38 years, Sherral Hosmer Warren; daughters, Carrie Scheuer and Stacy Warren; grandchildren, Brittany Glover and husband Allen and Randy Warren, Jr.; sisters, Nancy Warren and Charlotte Tolrud; brothers, Michael Warren, James R. Warren and Gary White; and several nieces, nephews and cousins. A Celebration of Life for Randy will be held at 7:00 PM on Monday, July 30, 2018 at First Christian Church of Johnson City with Pastor Tim Arnold officiating. Receiving of friends will be from 5:00 PM-7:00 PM. The family invites you to join them for a fellowship meal directly after the Celebration. First Christian Church Johnson City is located at 200 E Mountcastle Drive, Johnson City. The family would like to give special thanks to Dr. Phillip Claybrook, UNC Chapel Hill Cancer Center, Pastor Tim Arnold and Common Ground Church, and First Christian Church of Johnson City. Arrangements especially for Mr. Warren and his family have been made through Oakley-Cook Funeral Home & Crematory.

The family of Randall Franklin Warren created this Life Tributes page to make it easy to share your memories.

Send flowers to the Warren family.