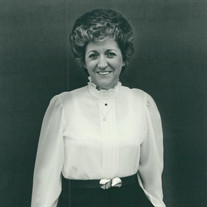 Peggy Ann (Gillenwater) Wilson, 86, entered into the loving arms of her Savior during the evening hours of Friday (February 25, 2022). Peggy was born on March 23, 1935 in Fort Blackmore, VA to the late Ernest & Rebecca (Brickey) Gillenwater. Peggy enjoyed the simplicity of life, she enjoyed gardening, shopping, and spending time with her grandchildren. Peggy was a loving wife, mother, grandmother, great-grandmother, sister, aunt, and friend; she will be greatly missed. In addition to her parents, Peggy was preceded in death by her husband, C.R. Wilson; and six brothers, Robert, Sam, Sinkler, Glenn, Cecil, and Fred Gillenwater. Left to cherish her memory are her son, Jeff Wilson & wife Jackie; daughter, Angie Riffey & husband Steve; four grandchildren, Monte Riffey & husband Chris, Chuck Riffey & wife Tina, Taylor Wilson, and Skylar Wilson; five great-grandchildren, Camdyn, Dakota, Ethan, Haylie, and Harper; two sisters, Charlotte Mann and Jean Lane; special friend, Martha Jones; several nieces, nephews, and a host of friends. Peggy will be laid to rest beside her beloved husband on at Glenwood Cemetery (839 Bluff City Hwy, Bristol, TN 37620) on Tuesday (March 1, 2022) at 2 p.m. Committal services will be held in the Mausoleum. In lieu of flowers the family requests that memorial contributions be sent to St Jude Children’s Research Hospital (501 St. Jude Place Memphis, TN 38105; www.stjude.org; 800-478-5833). The family would like to extend a special thank you to the staff of The Waters of Bristol (formerly Christian Care) for all the kind and compassionate care that was both given and shown to Peggy in her time of need. Online condolences may be made to the Wilson family at www.oakley-cook.com. Oakley-Cook Funeral Home and Crematory is honored to serve the Wilson family.

Peggy Ann (Gillenwater) Wilson, 86, entered into the loving arms of her Savior during the evening hours of Friday (February 25, 2022). Peggy was born on March 23, 1935 in Fort Blackmore, VA to the late Ernest & Rebecca (Brickey) Gillenwater.... View Obituary & Service Information

The family of Peggy Ann (Gillenwater) Wilson created this Life Tributes page to make it easy to share your memories.

Send flowers to the Wilson family.