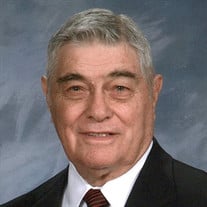 Paul William Musselman, age 94, of Bristol, Tenn., passed away on Monday, October 26, 2020 at his home. He was born on January 9, 1926 in Salem, Va., a son of the late Earl Thomas and Helen Mabes Musselman, and grew up in Roanoke, Va. Along with his parents, he was preceded in death by his loving wife of 69 years, Betty Jean Musselman; son, Michael Kent Musselman; sisters, Betty Doris Musselman Short and Janet Musselman Bowles; and brother, Ralph Musselman. Paul was a loving husband, father, grandfather, great grandfather, brother, and friend. He was a U.S. Navy Veteran having served his country in World War II in the South Pacific on the USS Dade at the Battle of Okinawa. He worked in Sales for Sunoco for 15 years and Blakely-Mitchell for 20 years. Paul was a graduate of East Tennessee State University where he played football and baseball, and ran track. He was drafted by the N.Y. Giants in 1952 where he went through spring training that March. He played with various minor league baseball teams in the Appalachian League. Paul was generous with his talents and his time, and helped build the Avoca Little League. He was an avid Rook player. He was a lifelong member of Woodlawn Baptist Church. He is survived by his son, Mark Reed Musselman and wife Kelli; granddaughters, Paige Musselman Owens and husband Mike, Faith Musselman, Danni Musselman Grogan and husband Mike, and Nicole Ragan Haberecht and husband Evan; grandson, Joe Ragan and wife Jennifer; great grandchildren, Kaleb Musselman, Lily Davidson, Brionna King, Ethan Lubecke, Sam Haberecht, Jake Haberecht, Avery Grogan, Eli Ragan, and Sophie Ragan; and sister, Evelyn Musselman Robertson; and several nieces and nephews. The family will receive friends from 5:00 until 7:00 p.m. on Thursday, October 29, 2020 at Oakley-Cook Funeral Home in Bristol, Tenn. A Celebration of Life will follow at 7:00 p.m. with Rev. Joe Blankenship officiating. Click here to view the service. The committal and interment service will be held at 11:00 a.m. on Friday, October 30, 2020 at Glenwood Cemetery in Bristol, Tenn. Pallbearers will be Joseph Ragan, Evan Haberecht, Sam Haberecht, Mike Owens, Kaleb Musselman and Michael Grogan. Those wishing to attend are asked to meet at the funeral home at 10:45 a.m. In lieu of flowers, monetary or food donations may be made to Woodlawn Baptist Church for Meals on Wheels, 1400 Southside Avenue, Bristol, TN 37620, or Bristol Emergency Food Pantry, 21 Washington Street, Bristol, VA 24201. Arrangements especially for Mr. Musselman and his family have been made through Oakley-Cook Funeral Home & Crematory.

Paul William Musselman, age 94, of Bristol, Tenn., passed away on Monday, October 26, 2020 at his home. He was born on January 9, 1926 in Salem, Va., a son of the late Earl Thomas and Helen Mabes Musselman, and grew up in Roanoke, Va. Along... View Obituary & Service Information

The family of Paul William Musselman created this Life Tributes page to make it easy to share your memories.

Send flowers to the Musselman family.