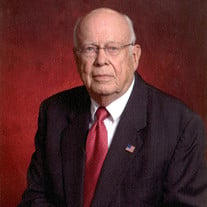 Paul Clinton King, age 89, passed away peacefully on Thursday, November 28, 2019, surrounded by his loving family. He was born on March 10, 1930 and raised in Kingsport, TN, a son of the late Arthur Bradford King and Gertrude Cofer King. Along with his parents, he is preceded in death by his loving wife of 66 years, Shirley Copenhaver King. Paul was a gentle soul who was deeply devoted to his family and especially to his late wife, Shirley. He was the very best father, grandfather and great grandfather to all. He attended the University of Alabama and remained a faithful Crimson Tide football fan until the very end. Paul was a member of Delta Tau Delta fraternity. Upon graduation, he entered into the U.S. Airforce and served as Lieutenant. His 30 year career with Sears as a Group Merchandise Manager was very successful and rewarding. After retirement, his many travels with Shirley created an abundance of wonderful memories. Paul will be fondly remembered by his children for his teachings of many life lessons, such as turning off the light when we left the room, girls don’t mow the grass, only boys take out the garbage, and how to check the oil and change a flat tire before we could drive. His grandchildren will always remember his magic trick of wiggling his ears. He is survived by his children, Brad King and wife Deborah, Natalie Lanaux and husband H.D., Susan Martin and husband Phillip, and Leslie Blankenship and husband Ken; grandchildren, Lauren Mustin and husband Beaux, Dr. Ryan King, Trey Lanaux and wife Carley, Ashley Lanaux, Paul Martin and wife Elizabeth, Kaitlin Martin, and Alexis, Collin and Bailey Blankenship; great grandchildren, Leighton and Walton Lanaux, and Cole and Harrison Mustin. Heaven is now a brighter place and Paul will be greatly missed by his family and friends. A visitation for family and friends will be held from 2:30 PM to 3:00 PM on Saturday, December 7, 2019 at Oakley-Cook Funeral Home in Bristol, TN. A Graveside Service will follow at 3:30 PM at Glenwood Cemetery in Bristol, TN with Rev. Jonathan Jonas officiating. The family would like to extend special thanks to Lovie “Cookie” Ladner, Trellis Hubbard, and Destiny White for their care and devotion. Arrangements especially for Mr. King and his family have been made through Oakley-Cook Funeral Home & Crematory.

Paul Clinton King, age 89, passed away peacefully on Thursday, November 28, 2019, surrounded by his loving family. He was born on March 10, 1930 and raised in Kingsport, TN, a son of the late Arthur Bradford King and Gertrude Cofer King. Along... View Obituary & Service Information

The family of Paul Clinton King created this Life Tributes page to make it easy to share your memories.

Send flowers to the King family.