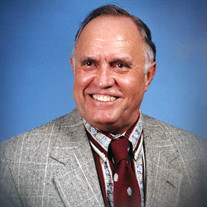 Norris Ronald Guthrie, Sr., age 87, of Bristol, Tenn., passed away on Thursday, December 26, 2019 at Bristol Regional Medical Center. He was born on February 20, 1932, in Morristown, TN, a son of the late Paul Vincent Guthrie, Sr. and Ellen Charlotte Norsten Guthrie. Along with his parents, he is preceded in death by his son, Norris Guthrie, Jr.; and brothers, John N. Guthrie and Paul V. Guthrie. Norris was a charter member of Holy Trinity Lutheran Church in Bristol, Tenn. He was self-employed as an Architect and served on the Bristol, TN Planning Commission from 1984-2014. Norris believed that God was pushing his pencil when he designed or enhanced many area churches. He enjoyed hiking and spending time with his family, friends and dogs. He is survived by his loving wife of 54 years, Charlotte Ray Guthrie; daughter, Christine Guthrie Lay; son, Sean Richard Guthrie and wife Paige; grandchildren, Braden and Brice Lay, and Isabelle and Nicholas Guthrie; brother, Fred V. Guthrie, Sr.; sisters, Marilyn Griggs and Kathryn Aycock; and several nieces and nephews. The family will receive friends from 1:00 to 3:00 pm on Sunday, December 29, 2019 at Oakley-Cook Funeral Home in Bristol, Tenn. A memorial service will follow at 3:00 pm with Pastor Phillip Vangen officiating. A private committal and inurnment will be held at a later date at Glenwood Cemetery. In lieu of flowers, memorial contributions may be made to Holy Trinity Lutheran Church, 1909 Volunteer Parkway, Bristol, TN 37620. The family would like to extend special thanks to Jason Powers who assisted Norris during his last days. Arrangements especially for Mr. Guthrie and his family have been made through Oakley-Cook Funeral Home & Crematory.

The family of Norris Ronald Guthrie, Sr. created this Life Tributes page to make it easy to share your memories.

Send flowers to the Guthrie, family.