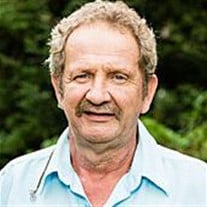 Michael Dean “Peanut” Brown died on Monday, September 24, 2018, after a courageous battle with cancer. Peanut was born on July 21, 1955 in Bristol, VA, a son of the late Albert and Wilbie Rush Brown. He is also preceded in death by a sister, Teresa Gail Hamby. He was a gifted handyman, and for the past 14 years he had served as custodian of State Street United Methodist Church, where he was paid to care for the building and he chose to care for the people. Each day, he arrived long before sunrise to prepare the building and to make coffee strong enough “to walk the dog.” Then he greeted everyone with a smile and usually with a nickname he had given. He was particularly beloved among the children of Spring Garden Preschool, who called him “Mr. Peanut.” He loved to visit their classrooms, to kneel for hugs in the hallway, to play Santa’s elf at their Christmas celebrations, and to give a silver dollar to each child who graduated. Peanut could not or would not say no, especially to people in need. He went many extra miles for his co-workers and fellow church members. He cared for senior adults in the congregation by making repairs in their homes, providing rides to their appointments, and by making visits to their residential care facilities. He lived out his faith in Jesus Christ through the church’s ministries that most intentionally reach out to care for people in need. His heart was even bigger than his enormous bundle of keys, and his customary parting words “love you,” might have been the only expressions of love some who knew him ever received. Away from the church, Peanut loved making a deal for a vehicle or visiting a flea market, where he was most likely to buy a gift for a friend or a t-shirt that he could ruin while doing a repair job in someone’s home. Otherwise, he was probably buying yet another pocket knife with a story or yet another tool for his collection, since he often said, “The right tools make a job so much easier.” He is survived by sister, Reba Hess; two brothers, Robert and Steve Brown; several nieces and nephews; a loving church family; and the many preschool children whose lives he brightened. His love and legacy will live on in them for many years. “Peace plus love equals joy” was more than just a saying to Peanut. It was his way of life. May he rest in peace, surrounded by love, to rise in eternal joy. A memorial service will be held at 7:00 PM on Thursday, September 27, 2018 at State Street United Methodist Church in Bristol, VA with Rev. Jonathan Jonas and Dr. Mark Hicks officiating. A reception will follow the service for friends to fellowship and share memories of Peanut and his life. In lieu of flowers, memorial contributions can be made to Spring Garden Preschool, 300 W. Valley Drive, Bristol, VA 24201. Arrangements especially for Peanut and his family have been made through Oakley-Cook Funeral Home & Crematory.

The family of Michael Dean "Peanut" Brown created this Life Tributes page to make it easy to share your memories.