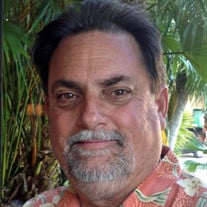 Michael Harold Akers, age 66, of Bristol, Tenn., passed away on Thursday, January 28, 2021 at Bristol Regional Medical Center surrounded by loved ones. He was born on January 15, 1955 in Key West, Florida, a son of the late Harold Martin Akers and Joyce Elizabeth Hillman Akers. Along with his parents, he is preceded in death by his father-in-law, Leo H. Rutherford; and grandparents, Thomas McKinley and Willie Bessie Boyd Akers, and Roy Grenade and Martha Inez Hillman. Michael was in Boy Scout Troop 415 at Reynolds Memorial United Methodist Church. He graduated from Sullivan Central High School in 1973, and graduated from East Tennessee State University in 1980. He married his soulmate and the love of his life, Barbara Rutherford Akers on August 30, 1980 at Reynolds Memorial United Methodist Church. They just celebrated their 40th anniversary together. Michael’s craft and love of the outdoors reflected in his work and everything he did. He was a hard worker and was never afraid to get his hands dirty. He began working at the age of 16 doing construction jobs. Michael transitioned jobs and worked at Carpet Mart, then Pendley Construction, and soon after, Powell Construction. He began his own business, MBA Home Improvements, and ran it for over a decade. He also worked for Lowe’s Home Improvement and most currently owned and operated Sweet ‘N Salty Snack Service. Michael was also a member of Bristol Lifesaving Crew Auxiliary. In his retirement years, he enjoyed being outside and tending his garden. He never met a stranger, and as such mentored those who wanted to learn any craft. He enjoyed cooking for his family and others, and he was happy while in the kitchen or at the grill. He echoed a servant in his actions. Michael is survived by his wife, Barbara; sister, Cheryl Holdway (Tim); loving mother-in-law, Aileen Rutherford; brother-in-law, Herschel Rutherford (Linda); nieces, Dr. Kelly H. Coches (Mike) and Alysia H. Peppler (Allen); nephew, Alex Holdway (Amber); great-niece, Peyton Peppler; great-nephews, Jackson Coches, Emmett Coches and Marshall Peppler; godsons, Kevin Smith (Shallon) and Kris Smith (Claudia); special granddaughter, Valentina Jolie Smith; and his pride and joy, his fur-babies Daisy Mae and Duchess Marie. He also leaves behind many special family members and friends. The family will receive friends from 12:00 p.m. until 1:45 p.m. on Wednesday, February 3, 2021 at Oakley-Cook Funeral Home in Bristol, Tenn. A funeral service will follow at 2:00 p.m. with Rev. Laura Plaster and Rev. Scott Spence officiating. If you would like to watch the recorded service, please click here. The committal service and interment will be held after the service at Glenwood Cemetery in Bristol, Tenn. Pallbearers will include Mark Byington, Jeff Cloyd, Joseph Ledford, T.J. Pearson, Bruce Peters, Jim Rush, Ronnie Utsman, and Dave Wright. Honorary Pallbearers include Mike Coches, Allen Peppler, Alex Holdway, and the staff of ETSUHealth Family Physicians of Bristol. In lieu of flowers, memorial contributions may be made to: Reynolds Memorial United Methodist Church, 327 W. Mary Street, Bristol, VA 24201; Bristol Lifesaving Crew, 1601 Euclid Avenue, Bristol, VA 24201; or to the Sullivan County Animal Shelter, 380 Massengill Road, Blountville, TN 37617. The family would like to thank the Bristol Regional Medical Center’s nursing staff that lovingly cared for him, the COVID unit of 3E, the Intensive Care Unit, and the Critical Care Teams. A special thanks also goes out to the ETSUHealth Family Physicians of Bristol. Arrangements especially for Michael and his family have been made through Oakley-Cook Funeral Home & Crematory.

Michael Harold Akers, age 66, of Bristol, Tenn., passed away on Thursday, January 28, 2021 at Bristol Regional Medical Center surrounded by loved ones. He was born on January 15, 1955 in Key West, Florida, a son of the late Harold Martin Akers... View Obituary & Service Information

The family of Michael Harold Akers created this Life Tributes page to make it easy to share your memories.

Send flowers to the Akers family.