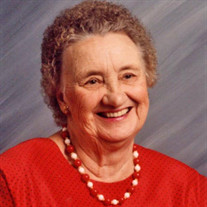 Our precious and loving mother, Mary Loretta Waycaster, age 96, of Bristol, VA, went to be with her Lord and Savior on Tuesday, August 7, 2018 at Bristol Regional Medical Center. She was born on February 8, 1922, a daughter of the late Grover Meade and Annie Robinson Meade of Castlewood, VA. Along with her parents, she is also preceded in death by her husband, Joseph Preston Waycaster; son, Raymond Chester Waycaster; daughter, Lois Irene Waycaster Gentry; brothers, Paul Meade, Arthur Meade, and D.A. Meade; sisters, Edith Osborne, Joyce “Tunie” Barnett, Marie Hurd, and Dorothy Jessee; grandson, Robert Edward Lee Cross; and special son-in-law, Virgil Ray Cross. Loretta retired from Bristol Memorial Hospital after 27 years of faithful service. Before her career at the hospital, she worked at High Rock, Troy Laundry, Sno-White Laundry, and ironed and baby-sat for various families. She was a member of Holston Baptist Church and loved to attend services when she was able. Loretta was also a member of the Douglass Senior Center and enjoyed the fellowship and bingo games on Wednesdays. She is survived by her son, Rocky Conley Waycaster; daughters, Evelyn Dulaney Cross, Elizabeth Pansy Waycaster, and Lucille Annie Waycaster; sister, Roberta Osborne; brother, Troy Meade; six grandchildren; and nine great grandchildren. Loretta was always a loving mother and grandmother and willing to help anyone in need. The family will receive friends on Thursday, August 9, 2018 from 6:00 PM until 7:00 PM at Oakley-Cook Funeral Home in Bristol, TN. The graveside service will be held on Friday, August 10, 2018 at 11:00 AM at Forest Hills Memory Gardens in Abingdon, VA with Pastor Charles Brooks officiating. Grandchildren and great-grandchildren will be serving as honorary pallbearers. The family would like to extend special thanks to Dr. Frederick Martin for all his attention to our mother’s medical needs and to Rev. Paul Stanley who was attentive to her spiritual needs. In later years she was cared for by her children. She will be sorely missed. Arrangements especially for Mrs. Waycaster and her family have been made through Oakley-Cook Funeral Home & Crematory.

Our precious and loving mother, Mary Loretta Waycaster, age 96, of Bristol, VA, went to be with her Lord and Savior on Tuesday, August 7, 2018 at Bristol Regional Medical Center. She was born on February 8, 1922, a daughter of the late Grover... View Obituary & Service Information

The family of Mary Loretta Waycaster created this Life Tributes page to make it easy to share your memories.

Send flowers to the Waycaster family.