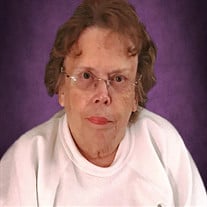 Mary Sue Neeley, age 83, of Bristol, TN, passed away on Saturday, November 24, 2018, at the Johnson City Medical Center in Johnson City, TN. She was born on December 29, 1934 in Blountville, Tennessee a daughter of the late James Harvey and Nora Ethel Cross Brown. She was preceded in death by five brothers, Bobby Joe, Carl Lynn, James Edgar, Jack Allen, and Benjamin Ralph Brown. Mary Sue was a member of Central Church of Christ in Johnson City, TN. She had worked for Monroe Calculating Machine, JC Penny’s and was a full time mother and grandmother making sure her family was cared for. She loved to quilt, spending time studying Gods word, and spending time with her family. She is survived by her husband of 57 years, R.E. Neeley; one daughter, Sherry Hawkins; one son, Greg Neeley and wife Melissa; three grandchildren, Brooke Carr, Shanna Patrick, and Christian Taylor; five great grandchildren, Zeth Norman, Holly Shockley, Bailey Griffith, Emily Patrick, and Ethan Patrick; two great-great grandchildren, Ayden and Everett Shockley; and several nieces and nephews. The family will receive friends from 5:00 PM until 7:00 PM on Tuesday, November 27, 2018 at Oakley-Cook Funeral Home in Bristol, TN. The funeral service will follow at 7:00 PM with Minister Tim Hall officiating. The committal service and interment will be held at 2:00 PM Wednesday, November 28, 2018 at Glenwood Cemetery in Bristol, TN. The family would like to extend a special thanks to Tim Hall and her church family at Central Church of Christ, the staff at Johnson City Medical Center, Dr. “Jay” Jaishankar and the staff at the Johnson City Cancer Center, and the staff at the Johnson City Internal Medicine for all the love and care shown to Mary Sue. In lieu of flowers, memorial contributions may be sent to St. Jude Children’s Research Hospital, 262 Danny Thomas Place, Memphis, TN 38105. Arrangements especially for Mrs. Neeley and her family have been made through Oakley-Cook Funeral Home & Crematory.

Mary Sue Neeley, age 83, of Bristol, TN, passed away on Saturday, November 24, 2018, at the Johnson City Medical Center in Johnson City, TN. She was born on December 29, 1934 in Blountville, Tennessee a daughter of the late James Harvey and... View Obituary & Service Information

The family of Mary Sue Neeley created this Life Tributes page to make it easy to share your memories.

Send flowers to the Neeley family.