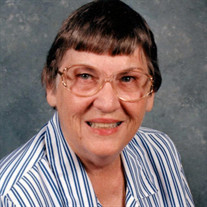 Margaret Rhoden Cross, 87, of Piney Flats, TN, passed away on Friday, February 15, 2019 at Bristol Regional Medical Center. Mrs. Cross was born on November 12, 1931 in Miami, Florida, a daughter of the late Ralph Augustus and Anne Mucke Rhoden. In addition to her parents, she was preceded in death by her husband, William Malcolm Cross. Margaret graduated from Rosarian Academy in West Palm Beach, FL. She lived in the greater Atlanta area from 1969 until she retired from Suntrust Bank and moved to her family property in Piney Flats, TN in 1994. She was the Past President of the Catholic Library in NW Georgia, was a Girl Scout Leader and area representative. She was a homemaker who loved crocheting, quilting, making flower arrangements, and reading. She was a member of St. Mary’s Catholic Church in Johnson City, TN. She is survived by one daughter, Laura McGirt; one son, David Cross; four grandchildren, Stephanie Elliott, Leslie McGirt, Anita Currin and husband Daniel, and Daniel McGirt; and two great grandchildren, Drew Young and Damian Currin. The family will receive friends Saturday, February 23, 2019 from 1:00 PM until 2:00 PM at Oakley-Cook Funeral Home. The committal service and interment will follow at Shell Cemetery in Piney Flats, TN with Deacon John Hackett officiating. Arrangements especially for Mrs. Cross and her family have been made through Oakley-Cook Funeral Home & Crematory.

The family of Margaret Rhoden Cross created this Life Tributes page to make it easy to share your memories.

Margaret Rhoden Cross, 87, of Piney Flats, TN, passed away on...

Send flowers to the Cross family.