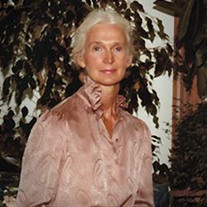 Louise Flanary Johnson, of Bristol TN, formerly of Lexington, KY, passed away peacefully on Friday, September 6, 2019. She was the daughter of Willie and Draxie Flanary, of Virgie, Kentucky. In addition to her parents, she was preceded in death by her husband, J. O. Johnson and son, Dirk Calvert Johnson. She is survived by her son, Timothy Johnson and wife, Nancy; her daughter, Angela Johnson-Dougherty and husband, E. Lynn Dougherty; grandchildren, January Hasken (Paul), Travis Dougherty (Brianne), Montana Dougherty (Lucas), Raine Dougherty (Chad), Coby Johnson (Jennifer), Tyler Johnson (Heather), Josh Johnson (Holli), Jay Johnson (Liz), Chase Johnson (Brittany), Ashton Crawford (Spencer), Geoff Crider and Lindsay Henry (Sean); and 14 great grandchildren. Louise was known to those closest to her as Mama Lou. She was kind, gentle, and exceedingly compassionate. Mama Lou helped to found the Yoga Health Center in Lexington, KY and was a highly sought after yoga and meditation instructor for many years. She was a lifelong student of alternative healing methods and performed energy work such as Reiki, Qi Gong, and Zero Balancing. She was affectionately known as the “Old Regular Buddhist” for her ability to embrace and learn about many spiritual avenues and faiths. Mama Lou maintained her yoga and meditation practice until her death. She surrounded her family with “white light” every morning and we all moved through life easier knowing she was there. Mama Lou read ceaselessly and her thirst for knowledge and enlightenment never waned. After her death, this handwritten note quoting Rumi, was found by her bed: “When I die, I shall soar with angels, and when I die to the angels, what I shall become you cannot imagine.” Pursuant to her desires, there will be no formal services. A joyful gathering of family and friends will take place from 3:00 PM to 5:00 PM on Sunday, September 15, 2019 at 414 Poplar Street, Bristol, TN. Arrangements especially for Mrs. Johnson and her family have been made through Oakley-Cook Funeral Home & Crematory.

Louise Flanary Johnson, of Bristol TN, formerly of Lexington, KY, passed away peacefully on Friday, September 6, 2019. She was the daughter of Willie and Draxie Flanary, of Virgie, Kentucky. In addition to her parents, she was preceded in... View Obituary & Service Information

The family of Louise Flanary Johnson created this Life Tributes page to make it easy to share your memories.

Send flowers to the Johnson family.