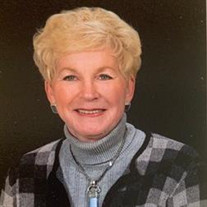 Mrs. Leah Miller Chapin, of Johnson City, TN passed away on May 25, 2021 at the Johnson City Medical Center at the age of 81. Leah was born and raised in Kingsport, TN. She had a creative spirit and a love for big city living. After living in Chicago, New York, Washington, D.C., West Palm Beach and Wellington, Florida she eventually made her way back to East Tennessee to retire in Johnson City, TN. Leah graduated from Dobyns-Bennett High School in 1958 where she was a majorette. As a young adult, she had a deep love for horses and was an avid equestrian. She was a smart and driven young woman. In her early career days she worked her way up to CEO of Adcom Paper and later made herself a successful career as a real estate agent in Johnson City, TN. Leah was a multi-faceted and talented woman who was most proud of her fundraising and creative endeavors. Her love for horses and riding inspired her to involve herself in raising money for the U.S. Dressage Associations in Virginia and Florida. Additionally, she fundraised and donated to the “Personal Legacy, The Healing of a Nation” exhibit at the National Museum of American History, Smithsonian Institute in Washington, D.C. Her poem “Beyond the Wall” was sold at the Smithsonian Book Store and all proceeds were given back to the Smithsonian’s Museum of American History. Having a deep passion for community and education she also wrote and produced her song titled “The Streets are for the Children” - a song inspired by her time living in Chicago. Leah was a caring, fun, loving friend and community member. After she retired her favorite pastimes were writing poetry, listening to music, volunteering, adopting and fostering cats, and spending time with family. Leah was a member of Saint John’s Episcopal Church in Johnson City, TN. She spent the last six years of her life at Elmcroft Assisted Living and was deeply loved by her care takers. Anyone who visited Leah knew they would always be greeted with her beautiful smile. Leah was the daughter of late Frank and Mildred Williams and was preceded in death by her three brothers, Mike Williams, Wray Williams, and John Williams as well as her husband John Chapin. Survivors include sisters-in-law, Ginger Williams and Connie Williams, and several nieces and nephews: Janina Williams Peltier and her husband Chris; Katherine Chapman and her husband Jackie and child Aspen; Emily McElroy and her husband Adam; Kasey Williams; Ally Williams and her fiancé Ian and children; Tyler Williams and his wife Tori and children; Wray Williams and his wife Shelley; Leah Williams and children. A private memorial service will be held with immediate family and close friends. In lieu of flowers, please make a donation to The Bridge No Kill Animal Shelter at P.O. Box 654, Blountville, TN 37617. Arrangements especially for Mrs. Chapin have been made through Oakley-Cook Funeral Home & Crematory.

Mrs. Leah Miller Chapin, of Johnson City, TN passed away on May 25, 2021 at the Johnson City Medical Center at the age of 81. Leah was born and raised in Kingsport, TN. She had a creative spirit and a love for big city living. After living... View Obituary & Service Information

The family of Leah Miller Chapin created this Life Tributes page to make it easy to share your memories.

Mrs. Leah Miller Chapin, of Johnson City, TN passed away on May...

Send flowers to the Chapin family.