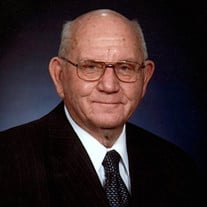 Lawrence Edward “Bud” Garland, age 88, of Blountville, TN, passed away on Friday, September 13, 2019 at Christian Care Center of Bristol, TN following a brief illness. He was born in Kingsport, TN on May 26, 1931, a son of the late Wesley and Beulah Garland. In addition to his parents, he was preceded in death by his “Little Brother”, George Nathan Garland, and daughter, Elizabeth Susan “Beth” Griffin. Bud attended Dobyns Bennett High School, but relocated to Blountville with his parents, graduating from Bluff City High School where he played basketball and baseball. He graduated from East Tennessee State University with a M.S. plus 45 hours in school administration and was a member of the school baseball team. He retired after working in the Sullivan County School System for 37 years, with his last position serving as principal of Blountville Junior High School. He was honorably discharged from the U.S. Army. Bud was a member of Blountville United Methodist Church where he and his wife Betty were married March 21, 1951. He was also a member of The Bethany Sunday School Class of which he served as teacher for approximately 32 years. His church family was always an important part of his life, and he truly valued his time spent and conversations with Pastor Susan Arnold. He served in the Bluff City Chapter of the Masonic Lodge. Bud truly valued the importance of an education. He was a voracious reader, always looking up definitions to words he wasn’t familiar with. When his health allowed, he routinely played golf, a sport he dearly loved, at Tri-Cities Golf Course, which originally was part of his family farm. He and wife Betty enjoyed many years of camping, square dancing and ballroom dancing. He will forever be remembered for his love of washing his car, and mowing his yard every third day whether it needed it or not. Bud is survived by his loving wife of 68 years, Betty Jean; daughters, Becky Cummings (Steve) of Atlanta, GA, and Rachel Forbush (Dr. Alan) of Johnson City, TN; grandchildren, Tara Koury, Leah Dye, Blake Cummings, Grant Cummings, Niki Schwenke, Wesley Forbush, Hope Forbush and Matt Forbush. He is also survived by several great grandchildren; nephew, Craig Morrell; and numerous cousins including cousin and special friend, Bill Akard and wife Donna who regularly visited and shared many a laugh. The family will receive friends from 11:00 AM to 1:00 PM on Monday, September 16, 2019 in the sanctuary of Blountville United Methodist Church in Blountville, TN. The committal and interment service will follow at Gunnings Cemetery in Blountville, TN. Pallbearers will be Wesley Forbush, Alan Forbush, Blake Cummings, Grant Cummings, Steve Cummings and Craig Morrell. In lieu of flowers, the family is requesting donation considerations to Blountville United Methodist Church (General Fund), 3390 Highway 126, Blountville, TN 37617, or to Meals of Good Will, Wheeler United Methodist Church, 211 N. Sanders Street, Blountville, TN 37617, in Bud’s Memory. The family would like to extend special thanks to Dr. Michael Grosserode for his wonderful care of Bud thru the years; to the entire staff at Christian Care Center of Bristol for their care and compassion; and to Pastor Susan Arnold of Blountville United Methodist Church. Arrangements for Mr. Garland and his family have been made through Oakley-Cook Funeral Home & Crematory.

The family of Lawrence Edward "Bud" Garland created this Life Tributes page to make it easy to share your memories.

Send flowers to the Garland family.