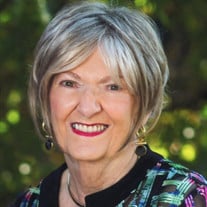 Tennessee, Virginia and the world lost one of its grand dames on October 27, 2020, when Lavalon Collie Wall passed away peacefully in her sleep in Bristol, Va. Her death follows a 26-year struggle with late onset diabetes, which led to other health ailments. Lavalon was born in Danville, Va. on June 15, 1936, the daughter of Howard White Collie and Lavalon Kernon Collie. She grew up an only child with her grandmother, four uncles and an aunt nearby. She often recalled her time on the four generation family farm, driving a tractor, drying tobacco and getting into mischief. During a fortuitous trip in August 2020 back to the family homestead, she passionately surveyed the property that still remains in the family and is now primarily a timber farm. While in junior high school, Lavalon laid eyes on a handsome high school baseball player, Bobby Franklin Wall. They married in 1957 and have spent 63 blissful years together. Shortly after marriage, the Walls moved to Bristol, Va. from Danville and began a long life of service and involvement within the community. The couple was active at their work, local schools, 4-H, Reynolds United Methodist Church, their beloved ballroom dancing clubs, and countless other organizations. Lavalon’s most passionate love (besides Bobby) were her two girls, Nancy and Aimee. She doted on them from the bassinette until last Tuesday, teaching them everything from cooking and entertaining to keeping home and public speaking all while sharing her great love of reading, clothes, and people. Lavalon was always there beside them, at twirling competitions, as a vocal voice in PTA, room mother, and running the concession stand at Sullivan East athletic events. She was very proud of her ability to cook and serve hundreds of hot dogs and hamburgers, often lamenting that she worked so hard that she missed her daughter’s performances as majorettes. One of Lavalon’s greatest gifts was baking. Throughout their time in school, there were fresh brownies and cookies awaiting the girls when the bus dropped them off. Dinner involved Lavalon’s culinary repertoire, including her legendary spoon burgers, lasagna, spaghetti and meatballs, and angel biscuits. If one of her scores of friends had a cooking question, they called Lavalon and a lengthy phone conversation ensued. Lavalon’s recipes have been included in several community cookbooks published by the Avoca Library and others. Christmas was a legendary time in the Wall household. Lavalon owned enough Christmas decorations to open a shop, with nutcrackers, snowmen, Old Saint Nick and other figures everywhere. Her bulging Christmas tree couldn’t hold 90% of the ornaments she owned. The Waterford ornaments were her favorite, and she made sure to give one to her daughters and also gave engraved silver bell ornaments to each of her granddaughters every year. All of life and especially the holidays, became even more special with the birth of Lavalon’s granddaughters, Lindsay Chester, Hailee Hopkins, Kristen Chester, and Hattie Hopkins. Every Christmas Eve, from birth until 2019, they received holiday pajamas. Even though the granddaughters now range from 25 – 29, they still get excited for the Christmas p-j’s, along with Lavalon’s famous oyster stew, crab dip served with Bugles and her unbelievable fruit cake. Despite all the time with family, Lavalon worked outside the home. Her favorite position was that of bridal manager and china buyer at Faucets, where she worked with brides to select their china, silver and crystal. This position helped her become a go to wedding planner in the area. After Faucets, Lavalon sold crystal, estate jewelry and other luxury goods at Ryland’s Jewelry on State Street in downtown Bristol. She admits she collected her salary in Waterford crystal, estate jewelry, and other favorites. Prior to her position at Faucets, Lavalon spent years as a 4-H Coordinator for the City School Program offered by the Country Extension Service. After her retirement, Lavalon was a leader in 14 organizations celebrating the heritage of the U.S. and Virginia, including the Daughters of the American Revolution and the National Society Colonial Dames XVll Century. Family heritage was very important to Lavalon. In addition to D.A.R. and Colonial Dames, the lineage societies to which she belonged: National Society Daughters of the American Revolution National Society Colonial Dames XVII Century Jamestown Society Order of Descendants of Ancient Planters National Society Daughters of the American Colonists National Society Daughters of Colonial Wars Order of Americans of Armorial Ancestry National Society Dames of the Court of Honor Huguenot Society of America National Society Magna Charta Dames Order of the Crown of Charlemagne in the United States of America National Society Daughters of 1812 National Society Colonial Daughters of the Seventeenth Century Order of the Steel Magnolias Lavalon is survived by her husband, Bobby Wall of Bristol, Tenn.; daughter and son-in-law, Nancy Hopkins and Ron Tanner of Bristol, Va. and Brooklyn, N.Y.; daughter and son-in-law, Aimee Chester and Scott Chester of Houston, Texas; granddaughter, Jessica Lindsay Chester of San Diego, Calif.; granddaughter, Hailee Kernon Hopkins of Fort Worth, Texas; granddaughter, Hattie Mahon Hopkins of Chicago, Ill.; their father, William Mahon Hopkins of Des Moines, Iowa; granddaughter, Kristen Nicole Chester of San Diego, Calif.; her treasured caregiver, Amanda Payne; and many family and friends from Danville, Va. Services will be private due to COVID-19, with a celebration of Lavalon’s life planned for the spring. Arrangements especially for Mrs. Wall and her family have been made through Oakley-Cook Funeral Home & Crematory.

Tennessee, Virginia and the world lost one of its grand dames on October 27, 2020, when Lavalon Collie Wall passed away peacefully in her sleep in Bristol, Va. Her death follows a 26-year struggle with late onset diabetes, which led to other... View Obituary & Service Information

The family of Lavalon Collie Wall created this Life Tributes page to make it easy to share your memories.

Tennessee, Virginia and the world lost one of its grand dames...

Send flowers to the Wall family.