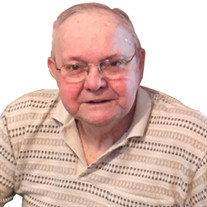 Larry D. Reynolds, age 81, of Johnson City, TN, passed away on Tuesday, January 15, 2019, at The Waters of Johnson City, Tennessee. He was born on April 23, 1937 in Elizabethton, Tennessee a son of the late Blaine Reynolds and Beulah Buckles Morrell. In addition to his parents, he was preceded in death by his twin brother, Harry Reynolds. Larry was a veteran of the United States Army. He was a truck driver for Mason Dixon Tank Lines and retired from Superior Carrier Tank Lines. He was a member of Marthina Memorial Chapel in Bristol, Tennessee. He is survived by his wife, Glenna Reynolds; four children, David Jones and wife Tammy, of Meadowview, VA, Jennifer Scott and husband Keith, of Gray, TN, Mary Couch and husband Cummins, of Columbia, TN, and Cathy Essin and husband Matt, of Piney Flats, TN; five grandchildren; nine great grandchildren; one sister, Karen Barnett and husband Danny, of Springboro, OH; one sister-in-law, Jean Reynolds, of Bluff City, TN; and several nieces and nephews. The family will receive friends from 11:00 AM until 12:00 PM on Friday, January 18, 2019 at Oakley-Cook Funeral Home in Bristol, TN. The funeral service will follow at 12:00 PM with Rev. Bud Brandscomb officiating. The committal service and entombment will follow in the Heritage Chapel of Memories at Glenwood Cemetery with military honors to be rendered by DAV Chapter #40 Honor Guard and members of the TN Army National Guard. Pallbearers will be Matt Essin, Evan Essin, Keith Scott, Joshua Scott, David Jones and Jeff Reynolds. The family would like to extend a special thanks to the staff at Caris Hospice and to the staff at The Waters of Johnson City for all their love and care shown to Mr. Reynolds. Arrangements especially for Mr. Reynolds and his family have been made through Oakley-Cook Funeral Home & Crematory.

Larry D. Reynolds, age 81, of Johnson City, TN, passed away on Tuesday, January 15, 2019, at The Waters of Johnson City, Tennessee. He was born on April 23, 1937 in Elizabethton, Tennessee a son of the late Blaine Reynolds and Beulah Buckles... View Obituary & Service Information

The family of Larry D. Reynolds created this Life Tributes page to make it easy to share your memories.

Send flowers to the Reynolds family.