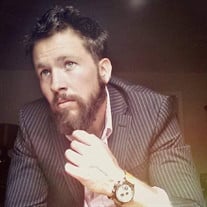 “I have fought the good fight, I have finished the race, I have kept the faith.” II Timothy 4:7 Justin “Bubba” Nixon, 29, of Bristol, TN, went to be with the Lord on Sunday, August 4, 2019. He is preceded in death by his uncle, Mark Nixon; and maternal grandfather, Terry Sams. Justin was a loving son, grandson, brother, cousin and friend who will always live on in the hearts of his family and friends. He was a graduate of Sullivan East High School, Class of 2009. He went on to attend East Tennessee State University, where he received his Bachelor’s degree in 2016. Justin loved playing the piano, football and had a real passion for coaching youth sports. He also enjoyed guns and target practice. Justin was of the Christian faith and had a deep love of the Lord. He will be greatly missed by those that had the honor of knowing him. He is survived by his mother, Nika Sams; father, Danny Nixon and wife Tammy; brothers, Matthew Nixon and David Rivers; sisters, Teryn Felty, Anastasia Pike, and Brandi Felty; paternal grandparents, Sidney "Buck" Nixon and Luella "Tiny" Nixon; maternal grandmother, Dot “Gan-Gan” Humphrey; aunt, Revonda Nixon; cousins, Amber Shaw, Cody Young, and Jessica Nixon; several nieces and nephews; and special friends, Ethan Webb, James McAnich, Roy Edwards, Amber Gragg, Katy Shuck, and smallest but equally special, Pippa Shuck. The family will receive friends from 4:00 PM to 6:45 PM on Thursday, August 8, 2019 at Oakley-Cook Funeral Home in Bristol, TN. The funeral service will follow at 7:00 PM with Pastor Johnny Dillard officiating. The committal and interment service will be held at 10:00 AM on Friday, August 9, 2019 at Eastern Heights Cemetery in Bristol, TN. Pallbearers will be close family and friends of Justin. Arrangements especially for Justin and his family have been made through Oakley-Cook Funeral Home & Crematory.

The family of Justin "Bubba" Nixon created this Life Tributes page to make it easy to share your memories.

“I have fought the good fight, I have finished the race, I have...

Send flowers to the Nixon family.