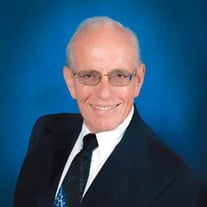 John Emil Lussier, age 77, of Bristol, TN went to be with the Lord on Monday, May 16. He was born on September 11, 1944 in Chicago, IL, to the late Verne and Florence Fleenor Lussier. After completing high school, John enlisted in the US Navy and proudly served as a fire control technician aboard the USS Norton Sound. Following his time in the Navy, John went to work as a computer technician with Univac, first in New Orleans, LA, then to Chattanooga, TN, and finally settling down in Bristol, TN. His career as a computer technician spanned more than 39 years where he saw the company transition from Univac to Univac/Sperry Rand, then to Sperry and finally Unisys. After retiring from Unisys, he remained active in the local community, including serving as an elections officer for the Sullivan County Elections Commission and as an active member of the Bristol Virginia Senior Show Choir, both for over 20 years. He proudly supported Sullivan Central High School athletics as the announcer during football and basketball seasons as the “Voice of the Cougars” for over 20 years. John had an active Christian faith throughout his life, and he was a member of Aldersgate United Methodist Church for over 47 years. During this time, he served as a Sunday School teacher, in various leadership positions on the churches’ administrative council and actively participated as a member of the choir. John loved traveling with his wife, Elizabeth, and seeing new places throughout his life, visiting all 50 states in the U.S. and cruising to various areas across the world. Family was always the central pillar in his life and he devoted his full time and energy towards his wife, his daughter, two sons and his 6 grandchildren. In addition to his parents, he was preceded in death by his loving wife of 56 years, Elizabeth T. Lussier of Bristol, TN and his daughter, Michele Mitchell. He is survived by his oldest son, John K. and his wife Stacy and their children Andrew and Ashlynn, his youngest son, Eric and his wife Diane and their children Caleb and Jacob, his son-in-law, William Mitchell and his children Kristen and Katelyn. The family will receive friends from 1:00PM to 2:30PM on Sunday, May 22, 2022 at Oakley-Cook Funeral Home. The funeral service will follow at 2:30 PM with Pastor Paul Griffith officiating. A private, small family committal service will follow the funeral at Glenwood Cemetery in Bristol, Tennessee. Pallbearers will be Andrew Lussier, Caleb Lussier, Jacob Lussier, William Mitchell, and Don Osborne. Memories and condolences may be shared at www.oakley-cook.com. In lieu of flowers, the family requests any donations be made to Aldersgate UMC in his memory. Oakley-Cook Funeral Home and Crematory, 2223 Volunteer Parkway, Bristol, TN 37620 (423-764-7123) is honored to serve the Lussier family during this difficult time.

John Emil Lussier, age 77, of Bristol, TN went to be with the Lord on Monday, May 16. He was born on September 11, 1944 in Chicago, IL, to the late Verne and Florence Fleenor Lussier. After completing high school, John enlisted in the US Navy... View Obituary & Service Information

The family of John Emil Lussier created this Life Tributes page to make it easy to share your memories.

Send flowers to the Lussier family.