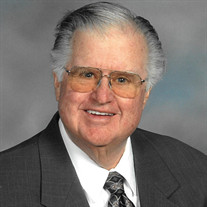 Dr. John S. Gaines, 86, of Bristol, Tenn., departed this life on Friday, May 3, 2019, at Oakmont at Gordon Park in Bristol, Va. He was born in Glendale, Calif., on March 15, 1933, son of the late John Strother Gaines and Mildred Walton Gaines. He is also preceded in death by his wife, Thelma Dowling Gaines; and sisters, Alice Gaines Scott and Nancy Gaines Womack. John’s passion in life was education. He received a bachelor’s degree in political science at Occidental College, where he also played on the golf team. While stationed with the U.S. Army in post-war Korea, he taught English as a Second Language at Seoul Academy and designed a golf course, which was built for the Seoul Area Command. He first taught English and history at Eleanor J. Toll Junior High in Glendale, then worked at Herbert Hoover High School in Glendale as a teacher of history and American government. During that time he received his master’s degree from California State University, Northridge, in administration and social science and co-authored textbooks on California history and government. He later went on to complete his doctorate in education at the University of Southern California. He held credentials in teaching and school administration in both California and Tennessee. In the fall of 1969, John moved to Bristol to take a job with King College as professor of education and American studies. Though born and raised in California, his father’s side of the family was actually from Sullivan County, Tenn., so the move proved to be a homecoming of sorts. While he officially retired from King in 1999, he continued teaching classes there for the next several years. During his tenure there he taught courses in philosophy of education, secondary curriculum, Western civilization, American government, physical geography, cultural geography, urban studies, American studies, and the media and politics. At different points John also served as vice president for academic affairs and dean of the faculty, director of teacher education, division chairman, department chair of education, co-chair of American studies, director of placement, director of internships, director of summer programs, golf coach, Elderhostel faculty and advisor to the College Republicans. At various times he also taught courses for East Tennessee State University, the University of Virginia, Trinity College (Connecticut) and Occidental College. He served as a trustee for Washington College Academy and Virginia Intermont College. He was a member of the National Commission of Chief Academic Officers, Tennessee Association of Colleges of Teacher Education, Phi Delta Kappa, SACS Deans Council and National Council for the Social Studies (Committee on Racism & Social Justice). As a young man, John served as a congressional intern, and he had a lifelong interest in politics. He served on the Bristol Tennessee City Council for 16 years, as mayor for five years and vice mayor for five years during that time. He was a delegate to the Republican National Conventions in 1996 and 2004. John loved to visit historic sites around the country and around the world and was frequently requested as a speaker on historical and political topics for civic organizations, service clubs, church groups and teacher in-service workshops. He was a member, deacon and trustee of First Baptist Church of Bristol, and he belonged to Bristol Noon Rotary, the VFW, Bristol Country Club, Sullivan County Republican Organization, Sullivan County Industrial Commission, Tennessee Rail Study Commission, American Public Power Association Policy Makers Council and the Bristol Sesquicentennial Committee. He maintained strong ties with relatives and friends in southern California and was a lifetime member of Oakmont Country Club, in Glendale. His community involvement also included service on boards of directors for organizations such as: Bristol Chamber of Commerce, Netherland Inn Association, Bristol & Mountain Empire Red Cross, Bristol Tennessee Essential Services, Tennessee Municipal League, East Hill Cemetery Association, Bristol Trainstation Foundation, Trans-Dominion Express, Bristol Tennessee Public Schools Foundation, Bristol Historical Society, Bristol War Memorial Foundation, First Tennessee Development District and the Arts Alliance of the Mountain Empire. Additionally, he served as chairman or president of the Bristol Public Library Board, Sullivan County Historical Society, Rocky Mount Association, Bristol Community Development Committee, Bristol First Baptist Foundation, Bristol Tennessee Better Schools Task Force, Sullivan County School Consolidation Commission, Bristol Schools 2000 and the Bristol Metropolitan Planning District. John is survived by his two daughters; Jennifer Kidder and husband Larry of Ithaca, N.Y., and Susannah McCroskey and husband Kevin of Bristol, Va.; grandchildren, Katie and Andrew Kidder, and Emily, Glenn, Ian, Mary, Connor, Kyle and Pierce McCroskey. The funeral service for Dr. Gaines will be held at 1 p.m. on Friday, May 10, 2019, at First Baptist Church in Bristol, Va. The family will receive friends before the service in the sanctuary from 11 a.m. to 1 p.m. There will also be a reception and celebration of his life in the Fellowship Hall at First Baptist Church from 6 p.m. to 8 p.m. the evening of the service. Honorary pallbearers are Randall Gilmore, Tony Massey, John Deakins, Dr. Mike Browder and the many friends with whom he shared regular Monday and Wednesday lunches. In lieu of flowers, donations may be made in Dr. John S. Gaines’ name to King University, 1350 King College Road, Bristol, TN 37620 or First Baptist Church of Bristol, 1 Virginia St., Bristol, VA 24201. Condolences and memories may be shared with the family and be viewed by visiting www.oakley-cook.com. Arrangements especially for Dr. Gaines and his family have been made through Oakley-Cook Funeral Home & Crematory.

Dr. John S. Gaines, 86, of Bristol, Tenn., departed this life on Friday, May 3, 2019, at Oakmont at Gordon Park in Bristol, Va. He was born in Glendale, Calif., on March 15, 1933, son of the late John Strother Gaines and Mildred Walton Gaines.... View Obituary & Service Information

The family of Dr. John S. Gaines created this Life Tributes page to make it easy to share your memories.

Send flowers to the Gaines family.