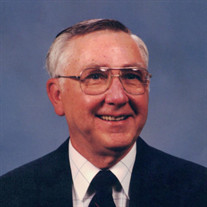 John Fletcher Coppedge, 93, passed away peacefully on March 21, 2021 at Christian Care Center of Bristol. He was born at home on Christmas Eve, 1927 in Stanton, Tennessee, the son of the late John Fletcher Coppedge, Sr. and Marguerite Bedford Coppedge. Along with his parents, he is also preceded in death by a sister, Marguerite Eleanor (Coppedge) Naifeh; and a daughter, Christy (Coppedge) Wolf. John’s paternal ancestors had lived around Stanton since they settled in Haywood County in 1820. Born into a home that, like many rural homes at the time, lacked running water and electricity. He came far over the course of his life. He attended Brownsville High School and upon graduating in 1946, enlisted in the U.S. Army. After boot camp in Georgia, John was given some cash and told to report to a base in San Francisco. He traveled there alone by train and boarded a troop ship for a harrowing voyage to Japan. There he served in the postwar occupation forces as a member of the Signal Corps, rebuilding Japan’s telecommunications network. When John’s service ended in 1948, he attended UT Junior College (now UT-Martin) and the University of Tennessee in Knoxville. He graduated in electrical engineering in 1952. While working for Union Carbide in Columbia, Tennessee, he married Frances Anderson in 1953. In 1956 they moved to Bristol, Tennessee, where he worked for Sperry-Farragut. After a brief transfer to Long Island, New York, they returned to Bristol in 1957. In 1965, John spent six months at China Lake Naval Base in Ridgecrest, California, working on the guidance system for Shrike missiles, which destroyed Soviet-built radar installations in North Korea. John continued working at Sperry through its evolution to Sperry-Rand, Univac, and Unisys, first as an electrical engineer and later as Quality Control Manager. When Unisys closed its Bristol plant, he finished out his career at Raytheon before retiring in 1990. He was a formidable, lifelong tennis player and competed in tennis and table tennis in the Senior Olympics regional tournaments and the National Senior Games in Baton Rouge. John was also a skillful wood and stone carver. He produced dozens of beautiful pieces which exhibited and sold at area craft meets. He enjoyed watching tennis, as well as UT Vols sports. During retirement, he assisted in building six Habitat for Humanity houses and volunteered as an AARP Tax-Aide for 15 years. John also participated in Meals on Wheels deliveries with Frances for many years. He is survived by his wife, Frances Anderson Coppedge of Bristol; sons, Michael John Coppedge (Lynn McDonald) of South Bend, Indiana, and Whitley Anderson Coppedge (Liane Ricci) of Chapel Hill, North Carolina; grandchildren, Nathan Coppedge and Brian Coppedge of New Haven, Connecticut and Lydia Coppedge of Lafayette, Indiana; and many cousins and nephews. A private entombment and memorial service will take place at Glenwood Cemetery. Memorial contributions may be sent to First United Methodist Church, where he was a member for many years. Arrangements especially for Thomas and his family have been made through Oakley-Cook Funeral Home & Crematory.

The family of John Fletcher Coppedge created this Life Tributes page to make it easy to share your memories.

Send flowers to the Coppedge family.