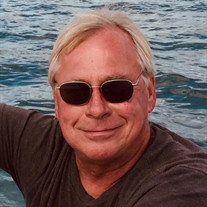 On the afternoon of May 5, 2020, John Campbell, aged 64, passed away at home in Bristol, TN surrounded by his family and friends. John was the son of the late Joseph and Celestine Campbell of Glade Spring, VA. Along with his parents, John was preceded in death by his late wife, Bernadette “Snookie” Crump Campbell. John is survived by his two sons and their families, Knox & Alena Campbell and their daughter, Feirin, of Chapel Hill, NC and Preston Campbell & Emily Sorah of Raleigh, NC, as well as his loving partner and best friend Sylvia Crum of Bristol, VA. John is also survived by his brother and sister-in-law, Joe K. and Catherine Campbell of Park City, UT; brother, Ken Campbell of Bedford, TX; along with several close cousins, nieces and nephews. John spent most of his adult life in Bristol, TN and, although he had a very close group of friends, he never once met a stranger. He had an exceptionally charismatic personality that could always bring a smile to your face. Throughout his life, John spent many sunny days at South Holston Lake while enjoying dinners with friends and frequently seeking out live music in town. There will be a celebration in the summer of 2020, to be announced, for family and friends. To honor John’s legacy, the family has created the John Douglas Campbell endowment to support Appalachian Sustainable Development. In lieu of flowers, we’re asking that you make a donation via www.asdevelop.org/donate, or send a gift to: Appalachian Sustainable Development, c/o John Douglas Campbell Endowment, 103 Thomas Road, Bristol, VA 24201. The family would especially like to thank Dr. John Mann for the guidance and support provided to John throughout his battle and especially in his last few weeks with us. We’d also like to thank Dr. Michael K. Gibson of Vanderbilt-Ingram Cancer Center for helping John get the absolute best care and for always fighting with him throughout his diagnosis. Arrangements especially for Mr. Campbell and his family have been made through Oakley-Cook Funeral Home & Crematory.

On the afternoon of May 5, 2020, John Campbell, aged 64, passed away at home in Bristol, TN surrounded by his family and friends. John was the son of the late Joseph and Celestine Campbell of Glade Spring, VA. Along with his parents, John was... View Obituary & Service Information

The family of John Campbell created this Life Tributes page to make it easy to share your memories.

Send flowers to the Campbell family.