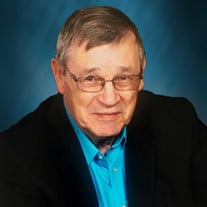 Joe Allen Garrett, age 79, of Bristol, TN, passed away on Friday, March 30th, 2019, surrounded by friends and family. He was born on January 29, 1940, in Bristol. He is preceded in death by his parents, Robert Garrett, Sr. and Margaret Garrett; brother, Robert “Bob” Garrett, Jr.; Mother-in-law, Mary Kiser Ferguson; and brother-in-law Roger Kiser. Joe was a man of few words, but had such a great sense of humor. He was easy going and always showed happiness, even in the worst of times. He was a lifelong member of South Bristol United Methodist Church, where he remained faithful until his passing. Joe loved teaching, and he took every opportunity possible to coach sports. He also taught Sunday school at his church, where he touched many lives through Christ. He remained a coach until his retirement from John. S. Battle High School in 1992. Joe spent his free time reading and watching sports on television. He is survived by his loving wife of 41 years, Billie Sue Garrett; sister, Deloros Garrett; brothers, James “Jim” Garrett and Howard Garrett; brother-in-law, Gary Kiser and wife Linda; special “friend-in-crime”, Linda Newman; and several nieces, nephews, cousins and friends. A visitation will be held from 6:00 PM to 8:00 PM Monday, April 1, 2019, at Oakley-Cook Funeral Home. The funeral service will begin at 11:00 AM Tuesday, April 2, 2019, at South Bristol United Methodist Church. Family & friends will follow from the funeral service to the committal at Glenwood Cemetery. Pallbearers will include Roger Gillespie, Richard Phillips, Jerry O’Neal, Bill Chapman, Tommy Webb, Greg Kiser, Andrew Jackson, Austin Kiser, and Lake Baldwin. Honorary pallbearers include Howard Webb, Herman Miller, Marty Roe, Kevin Wilson, Tim White, Dave Malcolm, all former athletes and coaches at John S. Battle High School, and all members of The Willing Workers class at South Bristol United Methodist Church. In lieu of flowers, memorial contributions are asked to be sent to South Bristol United Methodist Church at 1801 Southside Ave, Bristol, TN 37620. The family would like to extend special thanks to Dr. Brett Odum for his wonderful care and attitude towards Joe. The family would also like to thank all the staff of NHC and Caris for their help during this difficult time.

Joe Allen Garrett, age 79, of Bristol, TN, passed away on Friday, March 30th, 2019, surrounded by friends and family. He was born on January 29, 1940, in Bristol. He is preceded in death by his parents, Robert Garrett, Sr. and Margaret Garrett;... View Obituary & Service Information

The family of Joe Allen Garrett created this Life Tributes page to make it easy to share your memories.

Send flowers to the Garrett family.