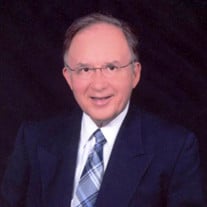 Hunter Preston Widener, age 77, was called by his Father to Heaven on Sunday, October 25, 2020 following complications of Lewy Body Dementia. His devotion to his family and his belief in God supported him in his struggle and ultimately gave him peace. He was devoted to his wife, daughters, grandsons and family. He was a member for many years at First Baptist Church, Bristol, Va. Hunter was born in the Widener’s Valley Community of Washington County, Va. He was preceded in death by his father, Hunter Preston Widener; mother, Marie McVey Widener; twin sister, Carolyn Marie Widener; and brother, Jim Widener. His deceased wife, Virginia Palmer Widener, the mother of Michelle and Laura, also preceded him in death. He is survived by his loving wife of 30 years, Jean Stidham Widener; daughter, Michelle Widener Davalos and husband Rick, and grandsons, 1st Lt. Ryan and Zachary of Big Stone Gap, Va.; daughter, Laura Widener Craiger and husband Roger, and grandson, Milo Farley of Bristol, Va.; sister, Betty Widener Boyd of Naples, Fla.; brother, Eddie Widener and wife Fannie of Goldsboro, N.C. He is dearly missed by his loved ones who celebrate the fact that he is at peace with his Creator. “We live out our lives moving toward that point of completion, but we only reach that point at death, when God gathers in His people with a love even greater that we have known on Earth.” Hunter graduated from Damascus, Va. High School in 1960 where he was Sophomore Class President, Senior Class Vice President and recipient of the Virginia Education Scholarship, Crist Award and VFW Award. He entered Berea College, Berea, Ky. in 1960. While at Berea, he served as Chair of the Christian Youth Council, member of the Student Judicial Commission and served as YMCA Chaplain and Junior Counselor. His class represented Berea College at the National Conference on “Problems of Appalachian Rural Youth” at Oklahoma State University. He also represented Berea College on a panel regarding Appalachian Development and the Council of the Southern Mountains, Inc. at Princeton University. During the summers and Christmas breaks, he worked at the U.S. Department of Interior in Washington, D.C. He graduated with a degree in Sociology and following Berea College, he worked as a Social Worker at Christian Church Children’s Home, Danville, Ky. In 1965, he entered Kent School of Social Work at the University of Louisville, Louisville, Ky., and graduated in 1967 with a Master of Science in Social Work. In 1968, he received a direct commission to the U.S. Army Medical Service Corps during the Vietnam Conflict, stationed at Fort Sam Houston in Texas. He was discharged in 1972 with the rank of Captain. In 1972, he accepted a position as Area Director for the Barren River Comprehensive Care Center, Glasgow, Ky. In 1975, he accepted the position of Executive Director of Highlands Community Services Board that provided mental health, retardation and substance abuse services for Washington County and the city of Bristol, Va. While at Highlands, he was elected Vice-Chair of the Virginia Association of Community Service Board and was recognized as “Executive of the Year” by the Washington County, Virginia Chapter of Secretaries, International. He served in this position for 31 years until his retirement in 2006. A committal service and inurnment will be held at 11 a.m. on Saturday, November 14, 2020, at Mountain View Cemetery in Bristol, Va. In lieu of flowers, memorial donations may be made to First Baptist Church, One Virginia Street, Bristol, VA 24201. A special thanks to Dr. Daniel Carroll, Family Practice, Kingsport, Tenn.; Dr. Thomas Bulle, Cardiologist, Kingsport; Dr. Peter Hedera, Neurologist, Vanderbilt University Medical Center; and Dr. Krcal Otaker, Neurologist, Kingsport; for their compassionate care. Arrangements especially for Mr. Widener and his family have been made through Oakley-Cook Funeral Home & Crematory.

Hunter Preston Widener, age 77, was called by his Father to Heaven on Sunday, October 25, 2020 following complications of Lewy Body Dementia. His devotion to his family and his belief in God supported him in his struggle and ultimately gave... View Obituary & Service Information

The family of Hunter Preston Widener created this Life Tributes page to make it easy to share your memories.

Hunter Preston Widener, age 77, was called by his Father to Heaven...

Send flowers to the Widener family.