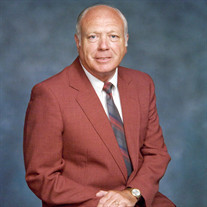 Howard Coleman Webb, age 88, of Bristol, TN, passed away on Sunday, October 13, 2019, at his home. He was born on June 22, 1931, in Bristol, TN, the only child of the late French L. and Anna Lee Bray Webb. In addition to his parents, he was preceded in death by his sister-in-law, Maxine Burkett Goodman; and brothers-in-law, Benny Burkett and Tate Goodman. Howard graduated from Tennessee High School in 1951 where he was a stellar athlete in both basketball and baseball. He played on the winningest basketball team in the school’s history in 1948-49, with a record of 34-1. He was named All District and All Regional Player his Junior and Senior years in both basketball and baseball. Howard received a scholarship to play both sports at Tusculum College. He was also on the tennis team. He was one of the Charter Members of the Sports Hall of Fame established in 1981 at Tusculum. Howard served as president of his Senior Class and graduated in May 1955 from Tusculum College. Following graduation, he served two years in the United States Army. Afterward, Howard began teaching and coaching in Southwest Virginia, where his career spanned 30 years including one year at Rich Valley High School, four years at Honaker High School, and 25 years at John Battle High School. He coached and/or was an assistant in basketball, football, baseball, and golf. He retired in June 1987. Howard chose a teaching/coaching career over a job at Eastman Chemical Company so that he could work with young people. His goal was to have a positive influence on the hundreds of young people with whom he came in contact. Coach Webb was an outdoors and outgoing person who loved people from the youngest to the oldest. He and his buddy, Wayne Burnette, coached the Beecham-Massengill Little League Team at Western Little League for 16 years. In retirement, his favorite things to do were fishing, golfing, and solving the world’s problems with the “Pit Stop Gang”. Howard was a faithful member of South Bristol United Methodist Church for 80 years and served as treasurer for 30 plus years. He was currently the Superintendent of Sunday School. There was no other place he would rather be on a Sunday morning. He is survived by his loving wife of 60 happy years, Sue Burkett Webb; daughter, Cindy Widener and husband Tim of Bluff City, TN; son, Kevin Webb and wife Jill of Nashville, TN; favorite granddaughter, Carson Widener; favorite grandson, Tucker Widener; his “adopted” family, Sexton and Nancy Burkett, Bettie Burkett, Bill and Reba Burkett, Curtis and Vicki Burkett, Patty and Nelson Prater; and sister-in-law, Judy Burkett. The family will receive friends from 5:00 PM until 7:00 PM on Tuesday, October 15, 2019 at Oakley-Cook Funeral Home in Bristol, TN. The funeral service will follow at 7:00 PM with Pastor Ray Amos, Jr. and former Pastor Dr. Charles Ledger officiating. The committal service and interment will be held at 11:00 AM on Wednesday, October 16, 2019 in the Heritage Chapel of Memories at Glenwood Cemetery in Bristol, TN. Honorary pallbearers will be Bob Statzer, Scott Gourley, David Booher, Dave Malcolm, David Thompson, Chip Jessee, Johnny Hensley, Will Wyatt, Jeff Perry, Butch Walker, George McClellan, Russ Basham, Chester Creasong, Jim Garrett, and all players who respected and loved him as their “Coach”. In lieu of flowers, memorial contributions may be made to South Bristol United Methodist Church, 1801 Southside Avenue, Bristol, TN 37620, or to the charity of your choice. The family would like to extend special thanks to caregivers, Debra, Will and Hope, Sherry and Jennifer, Dr. McCormick, and the staff of Amedisys Hospice. Arrangements especially for Mr. Webb and his family have been made through Oakley-Cook Funeral Home & Crematory.

The family of Howard Coleman Webb created this Life Tributes page to make it easy to share your memories.

Send flowers to the Webb family.