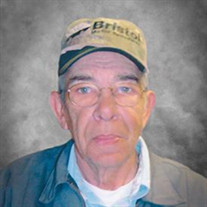 George “The Painter” Wilson, age 85, of Bluff City, went home to be with the Lord on Thursday, October 14, 2021 at the Bristol Rehab and Memory Care Center. George was born in Bristol, Virginia on August 6, 1936 to the late George Karo and Anna Mae Wilson. George served in the Navy from 1956 until 1960 and in the National Guard prior to the Navy. In his retirement, he had been employed for 16 years with Bristol Motor Speedway, under Larry Carrier and Jeff Bird. He was tagged George “The Painter”, as most people know him today, while making Nascar commercials for the Speedway. George also enjoyed fishing, hunting, boating, and spending time with his loving family. Along with his parents, he was also preceded in death by his wife, Mildred Fay King Wilson; a son, Danny Ray Wilson; and three step-brothers, Edward, Roy and Robert King. He is survived by his daughter-in-law, Jennifer; 9 grandchildren; Leslie, Laurie, Mitchell, Leah Fay, Christian Ray, Daniel, Logan, Ryan, and Dutch; 1 great-granddaughter; a brother, Bill (Margaret) Wilson; his sisters, Frances Hodge and Helen Raymond; one step-brother, Haskell (Darlene) King; his sister-in-law, Phyllis, a nephew that George raised as his own, John Raymond, and a host of beloved nephews, nieces and cousins. The family would like to thank the Ballad Healthcare ICU, 4-West and the Bristol Rehab and Memory Care Center for the loving care they gave George. The family will receive friends from 1:00 pm until 2:00 pm Monday, October 18, 2021, at St. Paul United Methodist Church, 1665 Allison Road, Piney Flats, TN 37686. The funeral service will follow at 2:00 pm with Pastor Dan Stiltner officiating. The committal service will follow in St. Paul Cemetery. Pallbearers will be selected from the family.

The family of George Robert Wilson created this Life Tributes page to make it easy to share your memories.

Send flowers to the Wilson family.