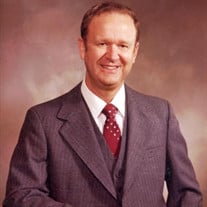 George W. Walden, age 90, of Bristol, VA went to be with the Lord on June 20, 2020 at the Ballad Hospice House in Bristol, TN. He was born on August 19, 1929, the son of the late William and Ella Schweinbraten Walden. He is also preceded in death by his loving wife of 64 years, Iler Walden; and sisters, Virginia Mosley and Margaret Ellen Bagley. George was a native of Selma, AL. He graduated from the Alabama Polytechnic Institute at Auburn University with a Bachelor of Science degree in Industrial Management in 1951. During his junior and senior year he was a member of the U.S. Air Force ROTC program studying aircraft maintenance. On June 2, 1951 he was commissioned a Second Lieutenant in the U.S. Air Force Reserve. He was assigned to active duty in 1951 and was honorably discharged as a Captain in 1955. His assignments included several stateside duty stations and an overseas assignment to Japan where he was a Squadron Detachment commander during the Korean conflict. His service awards include the Korean Service Medal, United Nations Service Medal and the National Defense Service Medal. He came to Bristol in 1970 to open the Electrolux plant as plant manager in Bristol, VA. Over his career, he would spend time working for GE, Electrolux and Sunbeam. George was a member of First Christian Church of Bristol, VA for many years and was devoted to the Lord all of his life as a faithful prayer warrior and child of God. He served as a trustee for King College and Director for the Virginia Manufacturing Association. George was an avid golfer and loved skeet shooting, hunting and preaching. He is survived by his daughters, Sharon Freswick and husband Ron of Bristol, TN and Shelly Henry and husband Dan of Roanoke, VA; granddaughters, Kristina Dobson and husband Tim and Kim Carson and husband Zach; great granddaughters, Danica Carson and Jessica Carson; sister-in-law, Mrs. Charles Payne of Selma, AL; brother-in-law, Mr. Harold Mosley of Selma, AL; niece, Leslie Ann King and husband Scott; great niece, MacKenzie King; great nephew, Clayton King and special friends, LaDonna Biggerstaff, Peggy Rodefer and BJ Sams. The family will receive friends from 6:00 PM until 7:00 P.M. on Tuesday, June 23, 2020 at Oakley-Cook Funeral Home in Bristol, TN. The funeral service will follow at 7:00 PM with Pastor Herb Peak officiating. The committal service and interment will be held at Live Oak Cemetery in Selma, Alabama. In lieu of flowers, memorial contributions may be made to First Christian Church Missions Fund, 311 Spencer Street, Bristol, VA 24201. Arrangements especially for Mr. Walden and his family have been made through Oakley-Cook Funeral Home & Crematory.

George W. Walden, age 90, of Bristol, VA went to be with the Lord on June 20, 2020 at the Ballad Hospice House in Bristol, TN. He was born on August 19, 1929, the son of the late William and Ella Schweinbraten Walden. He is also preceded in... View Obituary & Service Information

The family of George W. Walden created this Life Tributes page to make it easy to share your memories.

Send flowers to the Walden family.