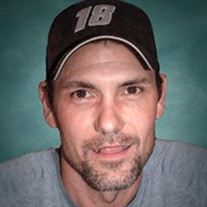 Gary “Gus” Hillman, age 47, of Watauga, Tenn., passed away suddenly on Sunday, July 12, 2020 at his home. Gus was born on September 20, 1972, in San Francisco, Ca. He was preceded in death by his mother, Lynn Rae Humphrey. In 1989, Gus moved to the Tri-Cities area. He graduated from Bristol Virginia High School in 1990, where he was an exceptional wrestler. He moved around the Tri-Cities, but settled in Elizabethton, Tenn. where he helped raise his children. Gus had a strong presence wherever he was. Either boisterous or relaxed, you knew he was around. His witty one liners and infectious smile would always shine out of him. He loved the people close to him dearly. He was a youth basketball coach and a great influence to all of the athletes he helped mold. Gus had a strong work ethic and would help out any chance he could. If you were his friend, he considered you family. He is survived by his loving family, wife, Misty Hillman; father, Gary W. Hillman; mom, Robin Hillman (Keesee); five brothers, Clarence Sickenger (Audra), Bruce Hillman, Jessy Hillman, Micah Hillman and Daniel Hillman; sister, Ashleigh Hefner (Clint); his children, daughters, Alyssa Lee and Alexis Maney; sons, Jacob Hillman, Zachary Bunten and Hunter Hudson; five nephews; two nieces; two grandchildren; special friends, Kim Felty and Joellen Rasnick; and also bonus children, Joseph Rasnick, James Milton and David Guinn. A Celebration of Gus' life will be held between the hours of 4:00 pm and 8:00 pm on Saturday, July 18, 2020 at Rotary Park - Harris Pavilion, 1001 N. Broadway St., Johnson City, TN. In lieu of flowers, the family requests that memorial contributions be made to the Keenburg Elementary School, Attn: Keenburg Youth Club, 139 Keenburg Road, Elizabethton, TN 37643, which Gus was very involved with over the years. Arrangements especially for Gus and his family were made through Oakley-Cook Funeral Home & Crematory.

The family of Gary "Gus" Hillman created this Life Tributes page to make it easy to share your memories.

Send flowers to the Hillman family.