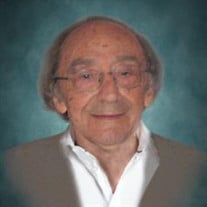 Frank Felix Faniola, Sr., age 96, has passed from this world on Wednesday, April 14, 2021 to join his heavenly family. He was born on November 28, 1924 in New York City, New York. He was the son of the late Gaetano and Josephine Martignetti Faniola, who immigrated to this country from Italy. Along with his parents, he is also preceded in death by his brother, John J. Faniola; and sisters, Francis F. Morris, Claire F. Colesanti, and Enes F. Hunter. Frank joined the Merchant Marines at age 18 and served as Radio Operator on the Liberty Ship S.S. F Marian Crawford and S.S. Camas Meadows. He had many stories of the ships being under attack and navigating through mine filled waters during WWII to deliver supplies to our troops. After serving his country, Frank was with American Airlines and transferred to Tri-Cities Airport in 1946 which brought him to this region. He went on to work for WJHL, WCYB, RCA and then retired from WCYB in 2001. He was a member of St. Anne Catholic Church. He was a well-respected employee and friend to all that knew him. Frank had an incredible work ethic and could ‘fix’ anything. His family would often sit with him and listen to his explanations of Einstein’s theories and geostationary orbit and watch him draw diagrams and schematics on napkins. His mind and personality will be greatly missed by his family and all that knew him. We are blessed that Frank was with us for such a long time. He is survived by his wife of 73 years, Dana P. Hawkins Faniola; sons, Lester G. and wife Barbara, and Frank F. Jr. and wife Carol; daughters, Rita F. Crosswhite and husband Larry, and Tweeter F. Mueller; grandchildren, Elle C. Charnisky (Mike), Vincent G. Faniola (Mitzi), Felicia F. Gregory (Josh), Phillip D. Faniola (Lindsey), Gina F. Olstad (Jace), Creighton S. Crosswhite, Noel J. Mueller III (Sydney), and Philip A. Mueller II (Emma); great-grandchildren, Molly Charnisky, Theodore Gregory, Grant Charnisky, Josephine Gregory, Ani Faniola, Ella Kate Faniola, and Wyatt James Mueller. He is also survived by many special nieces and nephews, including Debbie Faniola Saul and family. The family will receive friends from 4:00 p.m. until 6:00 p.m. on Monday, April 19, 2021 at Oakley-Cook Funeral Home in Bristol, Tenn. A graveside service will be held at 1:00 p.m. on Tuesday, April 20, 2021 at Shelby Hills Cemetery in Bristol, Tenn. with Father Chris Hess officiating. Arrangements especially for Mr. Faniola and his family have been made through Oakley-Cook Funeral Home & Crematory.

Frank Felix Faniola, Sr., age 96, has passed from this world on Wednesday, April 14, 2021 to join his heavenly family. He was born on November 28, 1924 in New York City, New York. He was the son of the late Gaetano and Josephine Martignetti... View Obituary & Service Information

The family of Frank Felix Faniola Sr. created this Life Tributes page to make it easy to share your memories.

Send flowers to the Faniola family.