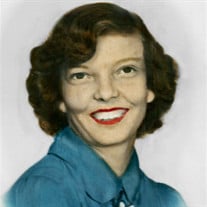 Fay Ann Bourgeois Carmack, age 83, of Bristol, TN, passed away on Sunday, September 23, 2018 at her home. She was born on May 29, 1935 in Gramercy, LA, a daughter of the late Wilford A. Bourgeois and Blanche M. Zeringue Bourgeois. She was preceded in death by her loving husband of 63 years, William Edward Carmack; two brothers, Cotton Bourgeois and Ray Bourgeois; and two sisters, Doris Laiche and Dot Bourgeois. Mrs. Carmack was a loving and sweet mother, wife, sister and friend with a touch of fiery Cajun in her. She attended Chinquapin Grove Baptist Church. She enjoyed spending time with her children and her great grandson, Mason. She is survived by two daughters, Cathy Fleenor and husband Mark, of Bristol, TN and Connie Tate and husband Curt, of Bluff City, TN; two sons, Chris Carmack and wife Cynthia and Cliff Carmack and wife Donna, both of Bristol, TN; grandchildren, Travis Carmack, Ashley Carmack, Jamie Fleenor, Mindy Hurley, Wes Fleenor, Jarred Tate, Lauren Clark, and Alexa Patrick; twelve great grandchildren; one brother-in-law, Robert “Bob” Carmack and wife Betty, of Bristol, TN; and several nieces and nephews. The family will receive friends from 5:00 PM until 7:00 PM on Thursday, September 27, 2018 at Oakley-Cook Funeral Home in Bristol, TN. The funeral service will follow at 7:00 PM with Pastor Jamie Ferguson officiating. The committal service and entombment will be held at 11:00 AM on Friday, September 28, 2018 in the Heritage Chapel of Memories at Glenwood Cemetery in Bristol, TN. Pallbearers will be Austin Clark, Jarred Tate, Keith Chenier, Ray Bourgeois, Jr., Mark Fleenor and Curt Tate. Those attending the committal service are asked to meet at Oakley-Cook by 10:45 AM for a funeral procession. The family would like to extend a special thanks to her caregivers, Patsy Cupp, Cynthia Bellamy, Sentinel Homecare, Smoky Mountain Hospice and Kelly Fry for all their love and care shown to Mrs. Carmack. In lieu of flowers, memorial contributions may be sent to Chinquapin Grove Baptist Church, 1727 Chinquapin Grove Road, Bluff City, TN 37618. Arrangements especially for Mrs. Carmack and her family have been made through Oakley-Cook Funeral Home & Crematory.

Fay Ann Bourgeois Carmack, age 83, of Bristol, TN, passed away on Sunday, September 23, 2018 at her home. She was born on May 29, 1935 in Gramercy, LA, a daughter of the late Wilford A. Bourgeois and Blanche M. Zeringue Bourgeois. She was preceded... View Obituary & Service Information

The family of Fay Ann Bourgeois Carmack created this Life Tributes page to make it easy to share your memories.

Send flowers to the Carmack family.