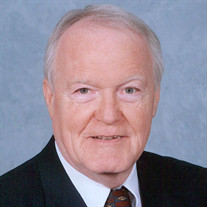 F. William (Bill) Thomas died February 2, 2020, at his home in Bristol, Virginia. He was born January 12, 1936, in Fairfield, Iowa, to the late Frank W. and M. Ruth Watts Thomas. When Bill was a child his family moved to Wellman, Iowa, and then to Warren, Illinois. There he became active in Boy Scouts and was selected for membership in the Order of the Arrow. During his high school years he played trumpet in band, participated in drama and lettered in football. He also began directing the choir at the Warren Methodist Church. Upon his graduation from Warren High School in 1954 he was selected by the faculty to present the commencement address to the 8th grade class. Bill attended the University of Dubuque in Iowa where he earned a BA in Philosophy in 1958 and a Bachelor of Music Education degree in 1960. At the University he was President of the Junior Class, a member of Phi Omicron fraternity, the orchestra, the Concert Choir and for 3 years was director of the Adrian Singers, the men’s touring choir. Upon graduation he received the Music Award “for meritorious contributions to the total music program on campus”. On March 2, 1957, he married his high school sweetheart, Diane Opie of Scales Mound, Illinois, who was also a music student at the University. In 1960 Bill began his teaching career in the public schools of Oregon, Illinois. In 1967 the music department won the Illinois Music Competition Sweepstakes. During the summer of 1964 Bill began work on his Master of Music degree at Northwestern University while also serving as Choral Assistant to George Howerton, Dean of the School of Music, and director of the NU choirs. Upon completion of his Masters degree he taught for two years at New Trier High School in Winnetka, Illinois. In 1970 Bill was appointed to the music faculty at Sullins College in Bristol, Virginia. He taught voice, music theory, humanities, and directed the choir until 1976 when the college closed. He then taught as an adjunct professor at King College until 1982. Beginning in 1970 he served as Director of Music at State Street United Methodist Church until his retirement in 2006 when he was named Director of Music Emeritus. Bill was director of the Kingsport Symphony Chorus from 1972 to 1981. Between 1972 and 1986 he was music director for many musicals under the auspices of Sullins College, Dogwood Playhouse, Bristol Children’s Theater and Theatre Bristol. Bill was a gifted teacher, conductor, and composer whose work brought joy and inspiration to both participants and listeners. He was truly kind and good, a dedicated man who enriched so many lives. To quote a friend “from having known this talented and generous man from the age of 8 - I am beyond proud, as are countless others, to carry the gifts that he gave us across time and space. Bill Thomas, you are always with us”. Bill was a member of the American Choral Directors Association and for six years was editor of its Southern Division Newsletter. During his Oregon, Illinois, years and the early Bristol years, Bill led Explorer Scout troops. His other volunteer work included hundreds of hours assisting his wife with the choral music program at Virginia High School. He was a sustaining member of Bristol Music Club, a member at large of the Bristol Evening Lions Club, a past member of the A! Magazine Editorial Committee, and together with his wife, Diane, was Recipient of the Arts Alliance Mountain Empire Arts Achievement Award in 2016. Bill will be especially remembered for his devotion to his family and his church. Survivors include: his wife of 62 years, D. Diane Opie Thomas; daughter, Deborah Diane Thomas of Broomfield, Colorado; son, Thomas William “Tom” Thomas and wife, Kim Muench of Estes Park, Colorado; daughter, Kathryn Kay Thomas of Yardley, Pennsylvania; three grandsons: Nychai Damone Burrell, James Thomas Moyer, and William Muench Thomas; three great granddaughters: Kya, Myaira and Khalani Burrell; two brothers: Robert Thomas of Chandler, Arizona, and Ronald Thomas of Trout Creek, Montana, several nieces and nephews and grand nieces and nephews. Bill was preceded in death by an infant grandson, Benjamin Rio Thomas. The memorial service will be held Saturday, February 8, 2020, at 2:00 PM at State Street United Methodist Church in Bristol, Virginia, with the Reverend Jonathan Jonas officiating. Visitation with friends and family will take place in the sanctuary immediately following the service. In lieu of flowers the family suggests, for those who wish to do so, a contribution to the music memorial fund of State Street United Methodist Church. Arrangements especially for Mr. Thomas and his family have been made through Oakley-Cook Funeral Home & Crematory.

F. William (Bill) Thomas died February 2, 2020, at his home in Bristol, Virginia. He was born January 12, 1936, in Fairfield, Iowa, to the late Frank W. and M. Ruth Watts Thomas. When Bill was a child his family moved to Wellman, Iowa, and... View Obituary & Service Information

The family of F. William (Bill) Thomas created this Life Tributes page to make it easy to share your memories.

Send flowers to the Thomas family.