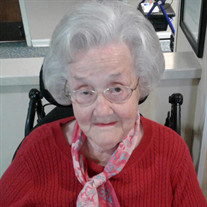 Lucille Kelly passed away in Bristol Regional Hospital on 12 December 2020 at the age of 99 due to complications associated with COVID-19. She was buried at Temple Hill Memorial Park in Castlewood, VA during a private service on 19 December 2020. Lucille was preceded in death by her parents, John and Lakie Kelly, and brother, Samuel Keel Kelly. Lucille was born on 10 November 1921 and grew up in a farmhouse in Castlewood, Virginia. Her parents, John and Lakie Kelly highly valued education, so she did well in school and went on to graduate with a bachelor’s degree from Radford College (now Radford University). After graduation, Lucille devoted her life to teaching, first in Clintwood, VA and later at Castlewood High School. Her infectious sense of humor and enthusiasm made her a much beloved teacher by her students. She was outstanding at math and wanted to teach it, but the principal felt that she would be a better English teacher. She taught high school English for more than 40 years before retiring in 1986. Lucille resided in assisted living for much of her retirement and spent her last year in the Christian Care Center of Bristol. She was very appreciative of the love and support provided by her helpers Joy Nelson, Ellen Hughes and Barbara Leonard. She enjoyed seeing old friends, neighbors and students who visited on a regular basis. As recently as last year, she received a large number of visitors and delighted in swapping stories and discussing the issues of the day. Her mind remained sharp as she could rapidly complete the Sudoku puzzle in the newspaper, which she avidly read on a daily basis. Ms. Kelly is survived by nephew Michael Kelly and his wife Missy Kelly of Bristow, VA, nephew Stephen Kelly of Lancaster, SC, niece Susan Kelly Rogers and husband James Rogers of Ardmore, OK, plus great nephews/nieces Matthew Rogers, Andrew Rogers, Kelly Rogers, Rachel Kelly, and Alexander Kelly. A memorial ceremony is planned for late spring when friends and family can hopefully travel from out of state. In lieu of flowers, the family asks that you consider making a donation to your favorite charity in the name of Lucille Kelly. Arrangements especially for Ms. Kelly and her family have been made through Oakley-Cook Funeral Home & Crematory.

Lucille Kelly passed away in Bristol Regional Hospital on 12 December 2020 at the age of 99 due to complications associated with COVID-19. She was buried at Temple Hill Memorial Park in Castlewood, VA during a private service on 19 December... View Obituary & Service Information

The family of Eula "Lucille" Kelly created this Life Tributes page to make it easy to share your memories.

Lucille Kelly passed away in Bristol Regional Hospital on 12...

Send flowers to the Kelly family.