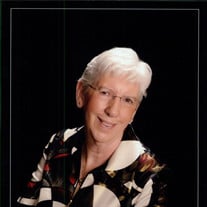 Elizabeth Tunnell Lussier, age 80, of Bristol, TN went to be with the Lord on Tuesday, February 22 at her home. She was born on August 24, 1941 in Duncanville, AL, the youngest of 9 children to the late William Nelson and Mary Tunnell. After earning her Bachelor’s Degree in Nursing from the University of Alabama in Tuscaloosa, Elizabeth was a nursing instructor, teaching first at the Mobile Infirmary School of Nursing in Mobile, AL and then at the Mather School of Nursing in New Orleans, LA. After retiring from nursing, she remained active in education as a substitute teacher in the Sullivan County School System. In addition to her focus on education, Elizabeth had a lifelong love of music and served as the organist and choir director at Aldersgate United Methodist Church, where she was a member for over 47 years. She was also an active member and participant of the Bristol Virginia Senior Show Choir for over 20 years. Within the community, she served as an elections officer for the Sullivan County Elections Commission for over 20 years and actively participated in various activities at both Slater and Douglas Senior Centers in the local area. Elizabeth loved traveling with her husband and seeing new places throughout her life, visiting all 50 states in the U.S. and cruising to various areas across the world. Family was always the central pillar in her life and she devoted her full time and energy towards all her loving roles as a wife, Mom, daughter and daughter-in-law, sister and Aunt, and she spent the latter part of her life proudly being known as Grandma and Mamaw to her 6 grandchildren. In addition to her parents, she was preceded in death by her daughter, Michele Mitchell, her sisters, Dallie and Doris, and her brothers, J.T., L.G., Jack, W. N. ( Jr.) and Doug. She is survived by her devoted husband of 56 years, John E. Lussier of Bristol, TN., her oldest son, John K. and his wife Stacy and their children Andrew and Ashlynn, her youngest son, Eric and his wife Diane and their children Caleb and Jacob, her son-in-law, William Mitchell and his daughters Kristen and Katelyn, and her brother, Morris Tunnell and his wife Wanda. She is also survived by her very special friend, Betty Sue and her husband Don Osborne. The family would like to express a sincere thank you to Amedisys Home Hospice. The family will receive friends from 1:00PM to 2:30PM on Sunday, February 27, 2022 at Oakley-Cook Funeral Home (2223 Volunteer Parkway, Bristol, TN 37620). The funeral service will follow at 2:30 PM with Pastor Paul Griffith officiating. A private, small family committal service will follow the funeral at Glenwood Cemetery in Bristol,TN. Honorary pallbearers will be Andrew Lussier, Caleb Lussier, Jacob Lussier, William Mitchell, and Don Osborne. In lieu of flowers, the family requests any donations be made to Aldersgate UMC in her memory.

Elizabeth Tunnell Lussier, age 80, of Bristol, TN went to be with the Lord on Tuesday, February 22 at her home. She was born on August 24, 1941 in Duncanville, AL, the youngest of 9 children to the late William Nelson and Mary Tunnell. After... View Obituary & Service Information

To view the Celebration of Life Service of Elizabeth Lussier follow the link below https://view.oneroomstreaming.com/authorise.php?k=1645665590168879

Elizabeth Tunnell Lussier, age 80, of Bristol, TN went to be...

Send flowers to the Lussier family.