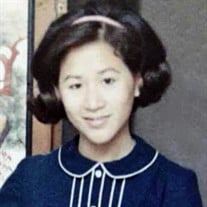 Dorothy Grace Slaughter, age 77, of Bristol, TN, passed away peacefully on Wednesday, January 6, 2021 at her daughter’s home after a lengthy illness. She was born on February 25, 1943, a daughter of the late Henry B. and Mary G. Lee. In addition to her parents, she is preceded in death by her first born grandchild, Baylee S. Garrett. Dorothy was born in New York City, graduated from The Dalton School and then Virginia Intermont College in Bristol, and then returned to the city to attend The Parsons School of Design. She enjoyed a long and successful career in print advertising at the Bluefield Daily Telegraph. She loved her daily early morning swims, playing the piano, sewing, and was a wonderful cook. Her children and grandchildren meant the world to her. She was their biggest fan and attended every recital, swim meet, band concert, and school play that they were a part of. She is survived by her son, Jeremy A. Slaughter and wife Angela, his twins, Benjamin and Brittany Slaughter and their brother, Brandon Slaughter; her daughter, Camille Garrett-Perkins and husband Steve, their daughters, Helena and Charlotte Perkins and their big brother, John Ian Garrett; brother, Henry B. Lee and wife Nikki; sister, Laura Aronowitz; and father of her children, Jerry F. Slaughter. We will all miss her and cherish the memories of the good times that we shared. A private family celebration of Dorothy’s life will be scheduled for a later time. In lieu of flowers, memorial contributions may be made to IRSF, 4600 Devitt Drive, Cincinnati, OH 45246 or St. Jude Children’s Research Hospital, 501 St. Jude Place, Memphis, TN 38105. Arrangements especially for Ms. Slaughter and her family have been made through Oakley-Cook Funeral Home & Crematory.

Dorothy Grace Slaughter, age 77, of Bristol, TN, passed away peacefully on Wednesday, January 6, 2021 at her daughter&#8217;s home after a lengthy illness. She was born on February 25, 1943, a daughter of the late Henry B. and Mary G. Lee.... View Obituary & Service Information

The family of Dorothy Grace Slaughter created this Life Tributes page to make it easy to share your memories.

Send flowers to the Slaughter family.